Alex Gibney's ode to a fellow who was crazy like a fox -- and maybe a little rabid. 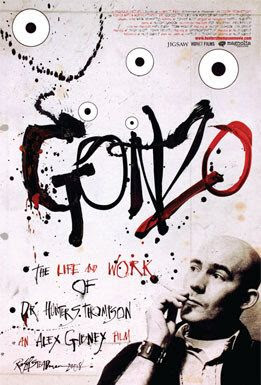 Documentary writer/director (this time with a lot of help from his deceased subject) Alex Gibney (right) continues to grow as a filmmaker. His latest and just released to DVD, GONZO: THE LIFE AND WORK OF DR. HUNTER S. THOMPSON, combines what looks like subtle re-enactments with old photos/filmed footage (including some from Terry Gilliam's 1998 film of Fear and Loathing in Las Vegas), interviews, great music and some especially terrific editing. It all adds up to a look at Dr. Thompson's life that may be a tad more worshipful than rigorously fair, though he does give a good amount of time over Thompson's two wives and lets them spell out some of the fellow's bad habits.

Thompson lived through Vietnam and Nixon's bombing of Laos and Cambodia; he loathed that man and that war no end, and then lived to see it happening all over again with Bush and Iraq. His suicide in the midst of President G.W. Bush's last term makes one wish he could have lived long enough to have witnessed the election of Barak Obama. Not that he would have greeted this with the ardent cow-towing that many have done, but I believe he would have felt the same surge of hope that did other of us cynics.

Gibney has given us a good look at Thompson, with particularly interesting sections on the 1968 Democratic Convention and its police riots, Jimmy Carter and his speech that converted Thompson, and the Muhammad Ali/George Foreman fight in Africa, which the writer let slip away from him -- and which, more than any other single event, may have begun his serious decline. As failed Presidential candidate Gary Hart says in one of his several scenes, there was something simply "infantile" about Thompson, and for all his amazing writing, it's this that comes through Gibney's film as clearly as anything else. Where Thompson's legacy is concerned, however, it's the writing that counts. As his second wife notes toward the end of the movie, imagine how horrible it would be if his words had died along with him.
TrustMovies at 6:04 AM
Share