The FSLC's Spanish Cinema Now fest: reviews -- and some interviews 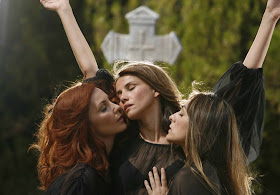 From Friday, December 5, through nearly Christmas, New York City's Film Society of Lincoln Center, along with New York City's Instituto Cervantes, is hosting the annual Spanish Cinema Now festival -- which, year after year, provides fun, surprise and -- once in awhile -- great art. Regarding that rare category, last year's SCN brought us Jaime Rosales' La Soledad, which went on to win Spain's "Goya" award for Best Picture but remains at this point -- shockingly enough -- bereft of any US theatrical or DVD distribution.

TrustMovies will be covering this fest via GreenCine but will link to all my posts there. (The first of these, in fact, is up now.) I also hope to be able to interview a few of the actors and directors associated with this year's program-- which includes a "Spotlight On" series honoring a terrific actor, Javier Cámara.

More, as a friend of mine often says, as it happens....
TrustMovies at 9:00 AM
Share