3SOME (aka Paper Castles, aka Castillos de cartón) debuts On-Demand

TrustMovies has been wondering just why a review he posted over three months ago is suddenly getting so many hits that it's now among his top ten posts.  The reason: In the interim IFC Films has picked up this exceptional movie, now titled 3SOME (originally called Paper Castles: Castillos de cartón in its Spanish language title), for an On-Demand release.  TM is happy to know this because the film is one of those that are so fine in so many ways, that it hurt to think it might not be seen again here in the U.S. (3some was first shown here as part of last year's Spanish Cinema Now series from the Film Society of Lincoln Center.) 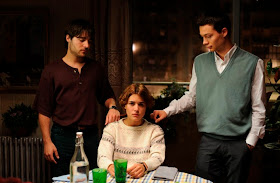 As my original review notes, the movie is very smart about art, young people, self-image and sexuality, and all of these things come to the fore during its brief but powerful 94 minutes.  The sex scenes are among the best -- original, funny, moving and real -- I've ever seen, and the use of nudity (including plenty of full frontal) is handled so well and believably that it's a pleasure to view on several levels.

The importance of art in the lives of these kids is also something the film brings beautifully to life. I am trying to recall another movie in which art -- appreciating it, talking about it, making it -- is conceived and executed any better than here, and I am (except perhaps for Seraphine) coming up short. The relationship between these three kids also rings terribly, hilariously, sadly true, and this is the subject the director (Salvador García Ruiz, shown at right) and his screenwriter Enrique Urbizu (based on a novel by Almudena Grandes) capture in spades. 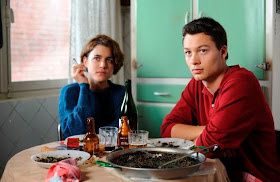 The three kids could hardly be better, and I hope we'll see them soon again: Adriana Ugarte (shown above, left with Nilo Mur) and Biel Durán (shown below).  The character played by Señor Mur, in particular, is full of surprise. We don't know until the end, just how smart and sad this fellow is, and when he unburdens, it is both devastating and cleansing. The quietest of the three, he also turns out to be the most perspicacious. 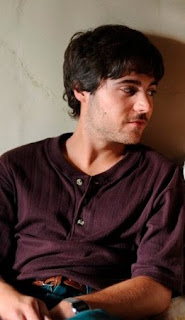 3some will be available On-Demand until May 11, 2010, as part of IFC's Festival Direct program; click here to learn if it's in your particular area.  I would advise a watch before it's On-Demand time is up.  Though, even then, I suspect it will make a DVD appearance.