BEHIND THE BURLY Q unveils via FRF: Burlesque as it was -- and is no more 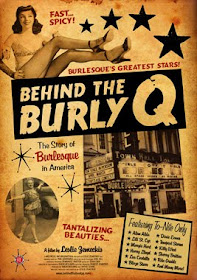 So much better in every way than last year's "burlesque" movie, A Wink and A Smile, Leslie Zemeckis' BEHIND THE BURLY Q takes us back a full century and then moves ahead fifty years or more to show what Ameri-
ca's most popular form of live enter-
tainment (during the first half of the 20th Century) actually looked, felt and sounded like. Ms Zemeckis (shown below) has accomplished it. Her film is history done right: informative, entertaining, funny and finally rather moving. 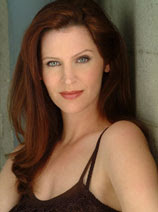 The comparison of Ms Zemeckis' movie with that of Deidre Timmons' is somewhat unfair, I realize, because the former offers documentary history, while the latter gave us a combo of group therapy and current classes & performances in modern-day, Pacific Northwest-style burlesque. Though this "art form" has for the most part been left out of our cultural history due to its sleazy reputation, Zemeckis remedies that via her portrait of the performers then and now, as they tell their stories and strut their stuff. 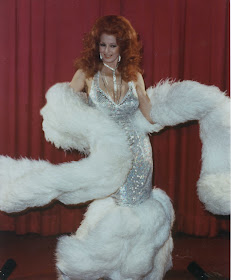 You'd have to be well into your senior years to have names such as Tempest Storm (above), Lili St. Cyr, Dixie Evans and Sherry Britton ring a bell, though the middle-aged among us might recall  Blaze Starr (below) from Lolita Davidovich's title-role performance in Ron Shelton's 1989 biopic, Blaze.  Either way, Behind the Burly Q viewers, once they've heard these performers' stories, are not likely to forget the actual women, so individual and interesting are they -- not to mention their acts. 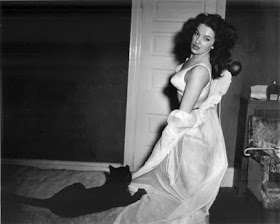 St. Cyr, the utterly gorgeous, slightly exotic, fashionably European-looking stripper remains, to my mind, one of the world's most beautiful women, easily besting the dowdy-by-comparison Marilyn Monroe. "Sally Keith," we are told by one burly-q performer, "was the best tassel dancer who ever lived!"  And we see why.  "I know I had a terrible voice," notes another performer, who goes on to explain that, "if the men wanted to see my body, then they had to hear my song." 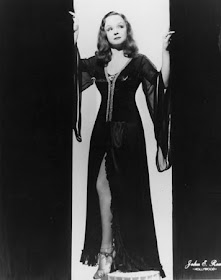 Tempest Storm, one dancer recalls, had no sense of rhythm.  "She never could bump to the beat."  Ms Storm, of course, disagrees.  There is fair amount of dishy talk here but mostly, the feeling generated is of sweet nostalgia for a time long gone -- even if that time included arrests and the occasional death due to a performer's getting hooked on certain substances.  (One of these deaths brings to the fore the only tears shed by one stripper for another during the film.)  Yet among the top-ranked ladies of burlesque, there's a surprising amount of bonhomie and savvy.  These were smart gals (like Betty Rowland, shown above) who often had to make a living for themselves and their kids during the Depression years.  They did it, they're proud of it, and you'll probably feel proud of them, too. 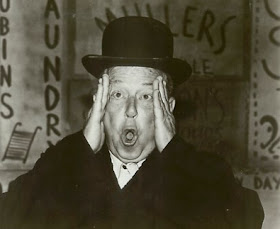 Until television arrived in America, burlesque comics such as Dick Lee (above) were a big part of the Burly-Q scene, and Zemeckis gives them their due.  We hear from Alan Alda (shown as a boy, below), whose actor father Robert (shown, below, at right), began his career as, we are told, a "tit-singer" (that's burlesque parlance for you: telling it like it is).  And we hear from Mike Iannucci, the late husband of Ann Corio, the ex-Burlesque Queen who single-handedly brought back the heyday of the art form with her traveling show This Was Burlesque during the 1960s and 70s (it flopped on Broadway in 1981). 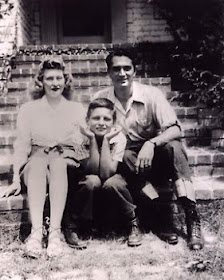 Zemeckis' movie is jam-packed with juicy detail, and most of that jam is tasty indeed.  While younger audiences may wonder what all the fuss was about -- police raids! jail sentences! church groups aflame! -- since you can see more sex n' sin in most R-rated movies than were on display in burlesque.  Times change, and mores with them.  Here, the good old days actually look kind of quaint-but-naughty -- and charming as all hell. 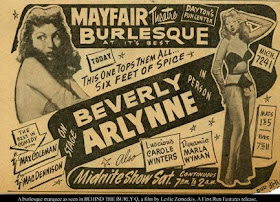 Behind the Burly Q, distributed by First Run Features,  opens this Friday, April 23, in New York City at the Quad Cinema, and in Los Angeles on May 7 at Laemmle's Sunset 5.  Being a film from FRF, we know a DVD will not be too long in arriving.
TrustMovies at 3:51 PM
Share