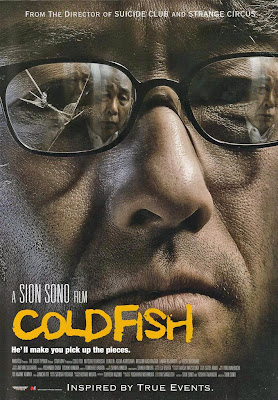 Well, TrustMovies should say that Sion Sono's COLD FISH tops -- only in some ways -- his earlier transgressions. The three I have so far seen are Suicide Club (still my favorite), Noriko's Dinner Table and Hazard. (I wonder when we will have a release of what is generally considered his best film, Love Exposure?). In Suicide Club, what looks like a ghastly mystery keeps opening up into things more horrible and even more mysterious -- to which there are finally no answers. With Cold Fish what's happening is much plainer, more easily seen and understood, though no less horrible. Yet here the mystery focuses in ever more tightly until it centers on the inscrutability of a single human soul. Who is this father/husband/man? What might he -- and, by extension, Japan and finally the world -- become? 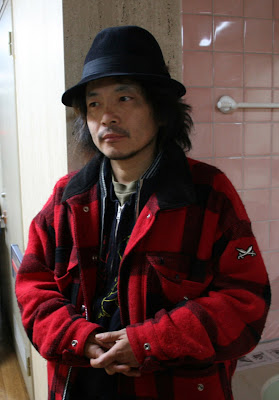 Based on true events, as the movie none too subtly tells us upfront, the tale Mr. Sion (shown at right) tells begins in the supermarket, as mom shops, fast and hard. She then prepares supper, ripping open packages and shoving them in the microwave, which dad and daughter soon eat in a silence broken only by a call from the girl's cell phone, after which she sprints out and away with her bottle-blond boyfriend. 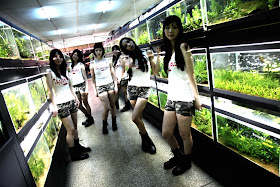 In the following scene, what she has appears to have sprinted away to was a bout of shoplifting, and now the parents -- it's actually dad and step-mom, as we soon learn -- are having to make those very Japanese bows and pleas so that the police will not be called. Ah, but in steps the kindly man who, with his wife, owns a local tropical fish store, and who first reported the shoplifting. He invites the family (coincidentally, Dad owns another, not-nearly-so-successful fish store) to visit his shop, where they are dutifully impressed. Then this impressario suggests hiring the daughter as part of his staff (above). As this nuclear family's home life is anything but swell (see below), all three agree. 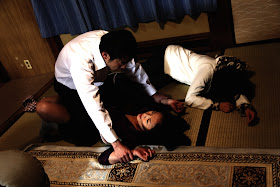 Too good to be true? As we should now know -- from other movies, if not from real life -- when something looks too good to be true, it generally is. Just how bad it is, however, is made clear unhurrieldy during this nearly two-and-one-half-hour movie that is never for a moment less than interesting, and often hits a ten on the scale of creep/shock/no!no!no! 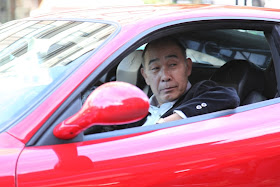 The movie is highly sexual, too, but in ways you might not initially imagine. It is even more highly violent and bloody. I am not usually a fan of such films, but there is much more than mere gore going on here. And one of the reasons why it is difficult to look away and certainly impossible to walk out of Cold Fish are the knockout performances from the five-star ensemble, especially those of the two leading men and particulary that of an actor who goes by the name of Denden and plays the "fish" impressario, Yukio Murata (shown in that racy red car, above). Said to be seen most often in the role of the kindly/funny uncle, this fellow is a revelation as a character you just might call Mr. Capitalism, but taken to an extreme rarely seen. Denden is by turns funny, scary, shocking and sensible in ways you won't even have considered. Yet he's always somehow real -- which makes him even scarier. 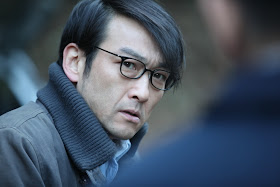 Murata's foil is the "nice" fish fellow Syamoto, played by Mitsuru Fukikoshi (above), as the worm who may never actually turn, and he, too, gives a fine performance. As the women in each man's life, Asuka Kurosawa (below) proves a randy/dandy foil as Murata's wife, while Megumi Kagurazaka (two photos below) as Syamoto's wife, though with a less showy role, still fills it out quite well. (She is, in the parlance, "stacked," and the movie certainly makes the most of this.) 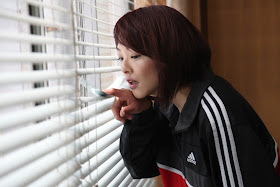 There is simply no point in going into the various plot twists and turns, as any telling of same unaccompanied by Mr Sion's spectacular visual sense would sound ridiculous. (Even with those visuals, it seems crazy, but I dare you to look away.) 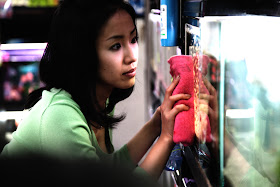 What is this movie trying to tell us?  Has it any message beyond shock and awe (and gore)? I think so. Parenting is up front. But so is nihilism. And what an odd and corrosive match this makes. With a focus so narrowly drawn, it is difficult to form conclusions about Japanese society at large. Once again, as in so many Asian movies, the police -- aka government -- prove ineffectual. But then, so do the crime boss and his men, the Yakuza, whom we briefly see. Nothing is a match for the combination of power, paranoia, smarts and strike-first mentality on view in the person of Mr. Murata. 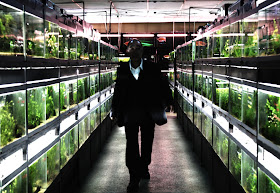 Interestingly enough, Cold Fish was supposed to have been part of the ongoing AMC/Bloody Disgusting/The Collective "Night Terrors" series this past month. But due, I surmise, to the fact that the film is still un-rated (were it to be submitted to our ratings board, it would certainly receive an NC-17), instead of appearing at AMC theaters this time, the film will appear at various... well, you might call them more underground sites -- like Brooklyn's reRun Gastropub theater, here in New York, where the movie opens on Friday, August 5 -- in a rather severely curtailed theatrical run. Like the other films in the series however, it has been promised to be made available eventually via streaming and/or DVD. (You can check out here the other four cities where you can see the movie.)  This curtailing is a shame, really, because Cold Fish is by far the best of the four Night Terrors films yet screened. Despite its gore-quotient, it's closer to crazy art than to sleazy exploitation.
TrustMovies at 6:21 PM
Share