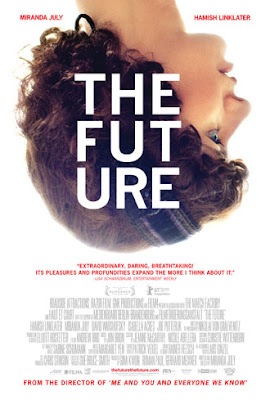 THE FUTURE?  There ain't much. Or so it'll probably seem to many viewers who brave the new movie by Miranda July, the lady who, a few years back, gave us the much lighter (on its feet and otherwise) Me and You and Everyone We Know. Folk who loved her last film (yours truly, for one) will flock to her latest endeavor. Their feelings upon exiting will depend heavily on how far they are willing to go down Ms July's increasingly dark road. 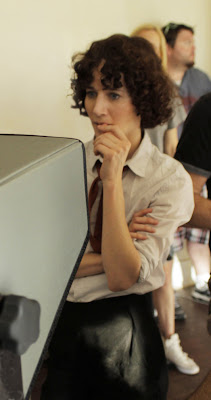 Her movie begins with a cat narrating (with Miranda, shown at right, providing the animal's near-ideal voice). This seems amazingly right (to me, at least; detractors will loathe it), including the cat paws, one bandaged from an accident. (See the final photo in this post for a look at that.) Paws and voice collude to create an indelible presence, who immediately takes us in with its own story of abandonment, near-death and then salvation, at the hands of a very odd couple, Sophie (played by Ms July) and Jason (played by Hamish Linklater, below, right). The cat's story -- it comes back and back again as the film progresses -- is of equal importance to that of Sophie's and Jason's, for the animal's future is dependent upon these two twerpy "adults" adopting it prior to euthanization. 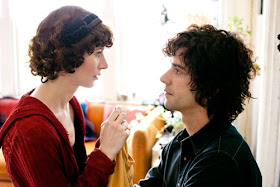 The thought of taking responsibility -- the movie's theme -- for someone (or even some thing) sets these two would-be free spirits into a terrible fright about aging, creativity, attractiveness, and lots more. So they quit their respective jobs -- he works from home as an IT helper, she teaches dance to pre-school-age kids (the kids are under that yellows cloth, in the shot below) -- in order to pursue their dreams while there's still time. Yes, these are dumb choices, but our twosome does not radiate like a bright bulb. 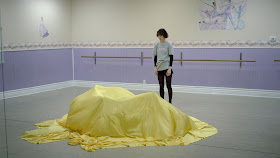 What happens to these two (they are generally more passive than active at any given time) makes up the meat of the movie and involves another man for her (for him, too -- but no, it's not sexual). Jason's man (Joe Putterlik, below) proves one the film's true delights and distractions. As quirky as its lead characters, Joe composes dirty ditties for his late wife and later on in the movie becomes the voice of the moon in a conversation with Jason. 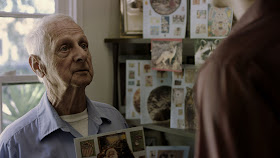 As for Sophie, she gets involved with Marshall, a widower dad in suburbia (well, this is L.A., so it's all sort of suburbia) whose daughter (below) is growing more and more desperate. 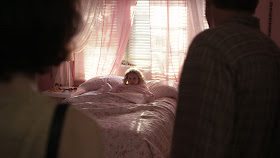 Sex with Marshall is good, or at least better, or maybe just different from that of Jason, but poor Sophie is followed literally by her own crunched-up yellow t-shirt or chemise (the color yellow must mean something here, but what?) and in one of the film's most telling and odd scenes, below, she dresses/hides in this large piece of material and does a strange/wonderful dance of sorts -- a kind of re-birth, perhaps? 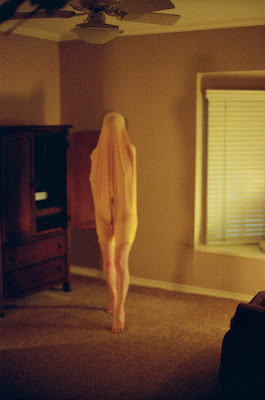 TrustMovies doesn't usually give away so much of a film's plot, but in this case, the connections and meanings, more than the incidents themselves, are what count. And The Future does count -- as a strange ode to failure and hope. That hopeful cat has, if not the last word, probably the best. What happens to it and what it tells us coincides, I think, with what Patricio Guzmán has to say in his wonderful docu-mentary Nostalgia for the Light. The Future, simplicity itself, may also be a little simple, but it is not simplistic. July and her characters are struggling, just like me and you and everyone we know. We are not growing up, But things are indeed growing darker. 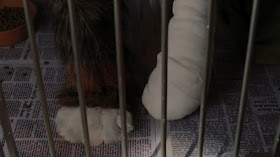 And yet, could Rogers & Hart, in their wildest dreams, have imagined how one of their most durable songs would be used in a movie? I doubt it. See for yourself, as The Future -- 91 minutes and distributed in the USA by Roadside Attractions -- opens this Friday, July 29, in New York City at the IFC Center.  There'll be more cities and theaters to come, I am sure, though Roadside isn't telling, as of the time of this posting, at least....
TrustMovies at 12:07 AM
Share