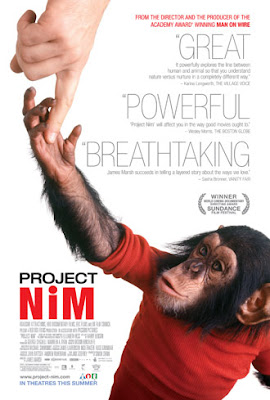 At its outset, back in the early 1970s, an animal experiment involving the use of sign-language taught to a chimp appeared to go quite interes-tingly and well. Hey, it made the cover of New York magazine! When we get the whole story, however -- which lasts decades, incorporates so much more than we might have imagined and looks like one of the more horrendous examples of animal anthropo-morphization (not to mention another glowing sample of human hubris) -- we're brought up short. This is PROJECT NIM, the new documentary from James Marsh, shown below, which is as fascinating and ironic a movie as you might expect from the filmmaker who gave us the award-winning Man on Wire. 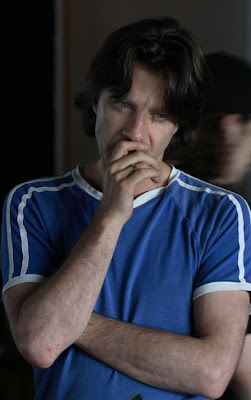 Over the course of the film and the life of Nim, its Chimpanzee star, so much happens and so event-filled is this tale that it bears comparison to the event-filled film of all-time, Paul Verhoeven's Holocaust hoot, Black Book. So intent is Nim's original surrogate mother, Stephanie Lafarge (an integral part of the experiment, she is shown flanking Nim, below, with her then-husband) in making our hero human that she even breast-feeds him and teaches him to smoke pot. (This was the 1970s, remember: anything went.) Later surrogates were both amused and abused by Nim, who, as he grows larger, also grows stronger and some-times hurts his keepers. But he also knows how to sign, "Sorry." 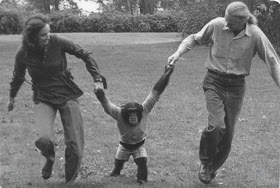 As the film moves forward, telling  Nim's tale, it also grows stranger, sadder and even frightening. And not simply for those people around Nim, who grow to love and care for him, but especially for Nim himself, who -- for all his inroads into language skills -- remains an animal adrift in a human world. 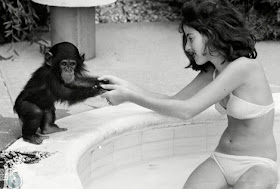 After recent films such as The Elephant in the Living Room (about the hazards of exotics pets) and One Lucky Elephant (that explored the human/animal bond at the expense of the animal), Project Nim is yet another cautionary documentary that reminds us of the -- surprise! -- animal nature of animals. 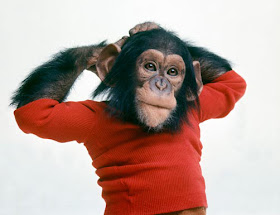 What sets the film apart are its story -- amazing, funny and important -- and its style. Mr Marsh is quite a movie-maker; he'll do anything, it seems, to tell his tale as well as it can be told. Combining interviews with all the major participants, complete with knockout archival footage, plus -- here's the kicker -- staged reenactments, the filmmaker weaves it all together so quickly and expertly that you have neither time nor inclination to separate the strands. (These are not the clunky re-enactments found on so many TV would-be documentaries. You barely realize that they are there.) 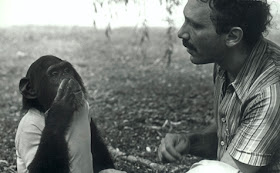 Is this "truth"? I would think so: recreated truth, at least. In telling Nim's story, Marsh finds one semi-villain, maybe two. Most notable is the Columbia University behavioral psychologist Herbert Terrace, who began the experiment (and then shut it down). Self -justifying and self-satisfied, Terrace seems to have felt little for anyone other than himself. Then there is the late and perhaps unduly noted "animal rights" activist Cleveland Amory, who "rescues" Nim, only to plop him into his most horrible environment yet, and who will not listen to a word of good advice from anyone else. 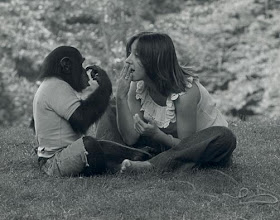 The rest of the characters surrounding our chimp range from loving and kind to foolish and kind -- with the exception of Bob Ingersoll, below, who comes off as perhaps Nim's one true, sensible human friend. The havoc some of these people wreak, while unintentional, is no less horrible, and the fine film made from it all is both a parable and a cautionary tale about man and beast. 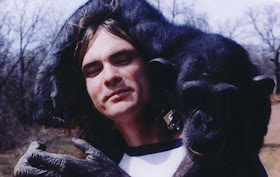 Project Nim, from Roadside Attractions, opens this Friday, July 8, in New York at the Angelika Film Center and the Elinor Bunin Monroe Film Center; in Chicago it will play at the Music Box Theater and in Evanston, IL, at the Cinema Arts 6. The film will open in the Los Angeles area, and in Boston, Atlanta, San Diego, Phoenix and San Francisco on July 15, with a wider expansion expected to follow soon.
TrustMovies at 7:07 PM
Share