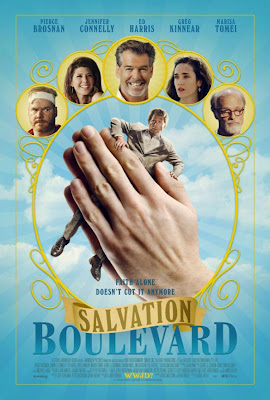 In yet another case of audiences for independent movies being smarter than the critics for same, SALVATION BOULEVARD, the new and enjoyably plot-heavy comedy from director/co-writer (with Doug Max Stone) George Ratliff, from the novel by Larry Beinhart, has opened to particularly negative review (only 10% "good" on Rotten Tomatoes, though nearly 70% of the audience approves of it). You will note, I hope, that I call this movie a comedy -- not a satire -- which is what, I believe, these critics decided that the film should be. And so they are now punishing it for not giving them the scathingly funny, shiv-sharp movie that they wanted. Well, compatriots: Go suck an egg. 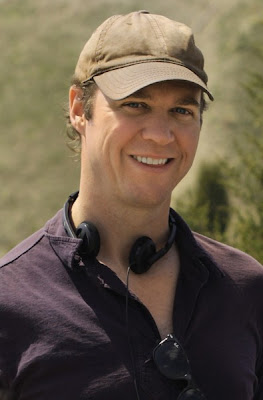 Instead -- thanks to Ratliff (shown, left), Stone and (I only suspect, having not read) Beinhart's original novel -- the film is an oddly sweet, sad and often very funny look at what religion in today's society makes of and does to its followers. (Salvation Blvd. would complete a fine double bill with last week's atheist drama The Ledge.) This is about as event-filled a film as you could wish for, with all of those events -- from the religious debate that opens the movie to death-by-pistol, kidnapping and a forced vacation on a glorious estate in faux Mexico -- spot-on and fascinating, each new one adding a layer of meaning and humor. 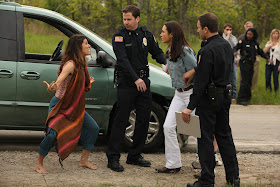 Ratliff has assembled a starry cast of well very-chosen pros, and each one nails his or her character, sometimes quite surprisingly. Jennifer Connelly (above, flanked by cops), for instance, seen last year as Charles Darwin's long-suffering wife in Creation, here plays a rabidly fundamentalist spouse, who is as scary as she is believable. She's a little sad, too -- which is why the movie never slides into simple-minded satire. It keeps its cast and their characters human at all times. (That's a very good Marissa Tomei, above, left, as an ex-Grateful Dead-head, facing off against Connelly.) 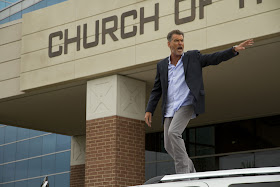 Pierce Brosnan (above) plays the unctuous fundamentalist preacher, making him more than just a figure of hypocritical fun.  He seems to believe what he preaches, stupid as it is, and when he missteps, it's an accident, all right, but he denies, runs away, lies and then resorts to murder -- all while trying to keep his relationship to the "almighty" intact. Sounds rather "human," no? Brosnan plays it straight and smart, and the filmmakers see to it that he is given no cheap-and-standard hypocrisy (like bedding his female -- or for that matter, male -- parishioners). 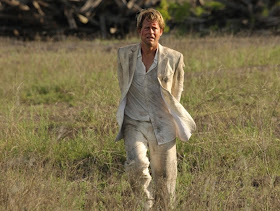 In the lead role is an actor who may be the most under-sung of any America male in his age range: Greg Kinnear (above). TrustMovies wrote an appreciation of this fine actor a year or so back (you can find that here), and he remains in awe of both this man's skill and the little appreciation he gets from our critical establishment.  Not that our critics put him down. They simply ignore him, and at this point in his career, he ought to be a national treasure, rather than just another actor plying his trade. In Salvation Blvd., as a former drugged-out "Dead"-head who has found Jesus and is living to regret that discovery, Kinnear is wonderful once again as our hero Carl -- who's maybe a little dumb but is possessed of such genuine humanity that he manages to stay alive and land on his feet. There's a scene toward the finale with Brosnan, in which Carl can either tell the truth and hurt someone badly or lie and give the guy a little peace. The moment he takes to reflect shows this actor at his finest -- and the movie-makers at their most humane. 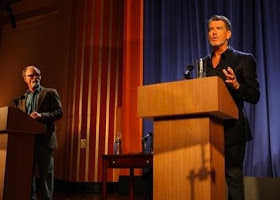 Ed Harris (above, left, with Brosnan) as an atheist professor, Ciarán Hinds as Connelly's dad, Isabelle Fuhrman (remember Orphan?!) as Kinnear's stepdaughter, Jim Gaffigan (below) as Brosnan's videographer and naughty right-hand man, and Yul Vazquez as a south-of-the-border entrepreneur with big ideas about construction, cheap labor and the Brosnan's character's Christian Community (this latter wrinkle is probably the movie's funniest and most pointed barb) all contribute to our enjoyment and amusement. 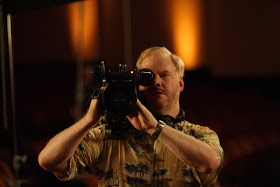 A movie about which I'd imagine Jesus would heartily approve (while whipping those money-changers out of the temple), Salvation Boulevard, from IFC Films, opened yesterday (apologies for the tardy review) in New York City at Clearview Cinemas' 1st and 62nd and Chelsea venues, and at the Village East Cinemas, and elsewhere soon, I hope. As with most IFC films, this one will able to be viewed via VOD, with its run beginning on Wednesday, July 27. Click here to determine how to get VOD from IFC....
TrustMovies at 12:21 AM
Share