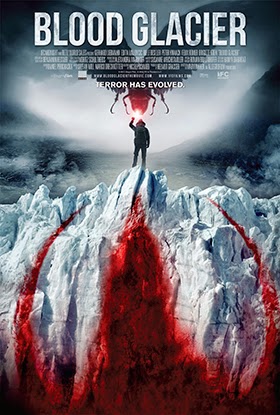 Really: How can any genuine genre aficionado resist a movie with a title like BLOOD GLACIER? I couldn't, anyway, because that title immediately brought expectations of everything from gore to global warming. When I checked into the resume of the film's director, Marvin Kren and discovered he'd also directed one of my favorite zombie movies of the new decade -- the swift, smart, subtle and stylish (if-no-budget) German film, Rammbock --
the deal was sealed. 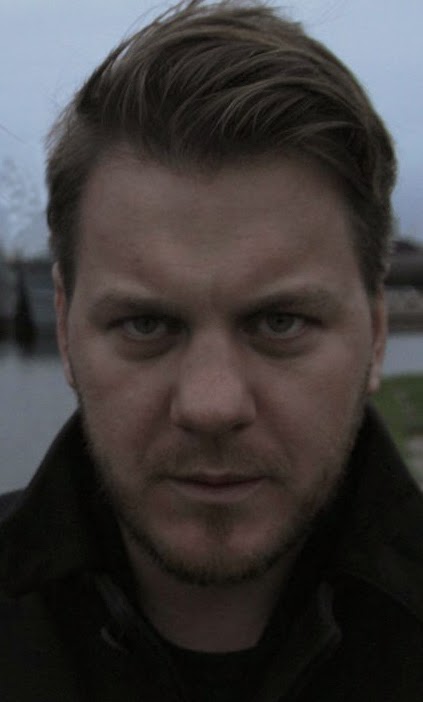 Rammbock took a hugely overworked genre and raised it a notch or two. With Blood Glacier, Kren (shown at right) and his writer, Benjamin Hessler, are working in the mode of a genre we haven't seen so often of late: the "warning" film about the hugely destructive effect of mankind upon our world. (From the original Godzilla through Tarantula, Them, and onwards, a myriad of movies underscored this theme in the decade following our use of Atomic bombs on Japan.) In addition to being one of those "warning" films, Blood Glacier is, as were most of the rest, a monster movie. Or to be absolutely correct: a monsters movie, as there are quite a few species involved. I wouldn't put a whole lot of faith in the "science" provided by the film as a basis on which to build the scenario, but so far as these scary tales go, this one is no more or less believable than many others. The scenario simply gives the moviemakers something on which to build their scares and suspense, and they do a pretty good job of it, overall.

The story: a group of scientists working in the Austrian Alps discover that a glacier seems to be oozing a red liquid, the effect of which does some rather nasty things to the local wildlife.  How the liquid is doing this is up for grabs but what it is doing appears to meld various species together. 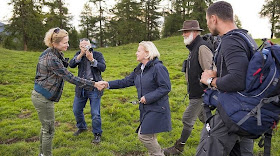 Into this suddenly discovered mess arrives a government minister (nicely played with strength and sass by Brigitte Kren -- above, center: any relation to the director, I wonder?) and her entourage, which includes the former girlfriend (Edita Malovcic, below right) of the guy who comes closest to being to "hero" of the film (Gerhard Liebmann, below, left), just as the shit hits full-blast. Soon it is every man and woman for him/herself, with a number of those quickly lost to the "newcomers."

The special effects department must have had a field day creating some of these odd, derivative species, and the filmmaker uses them for maximum thrills and suspense. And if the suspense sometimes nearly topples into camp, that's OK, too, because that's part of the fun of films like this one.

Among the main characters, your favorite might be the sweet mascot dog at the campsite, whose role in the proceedings just keeps growing. The plotting may look by rote, but pay attention, seeds planted along the way bloom later, and the finale is a lollapalooza -- simultaneously heart-warming and horrific. 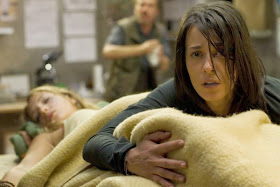 Performances are adequate to the matter at hand -- scaring the pants off you/making you giggle. Overall, there is enough fright, laughs, surprises and irony here to please a lot of genre fans. As to the climate change/global warming warning, what we see here should only happen to Republicans. And if the movie doesn't turn them into raging environmentalists, it will at least get them on board with abortion.

Blood Glacier -- distributed by IFC Films' Midnight division, running 98 minutes, and dubbed into English pretty well -- opens in theaters this Friday, May 2, simultaneously with its appearance on VOD. In New York City it'll open at the IFC Center. Elsewhere? Who knows -- but its VOD appearance ensures that genre fans across the country can take a look.
TrustMovies at 5:55 PM
Share