In GOING CLEAR: Scientology and the Prison of Belief, Alex Gibney tackles that so-called 'church' 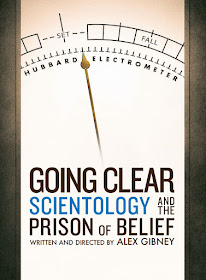 My first experience with Scientology occurred back in the mid 1970s, when neighbors of mine in Pacific Palisades, California, who had formerly been touting the wonders of this "religion'" suddenly found themselves -- because they wouldn't continue to give it more and more of their money -- on the "outs" with the group. They were harassed just about into insanity, and I felt so badly for them I determined never to get within a mile of Scientology or its acolytes, nor to let anyone I cared about near this sewer of fakery and disgust. Over the years, as has been true of just about all really awful, creepy ideas (and the organizations that spout them) -- from Nazis, Wall Street and our banking system to ISIS, just over half of our current Supreme Court and nearly all of the Republican Party -- instead of quickly disappearing in deserved ignominy, these things seem to grow and grow until they conquer then finally do so much damage that they at last must be destroyed. This certainly seems the case concerning Scientology. 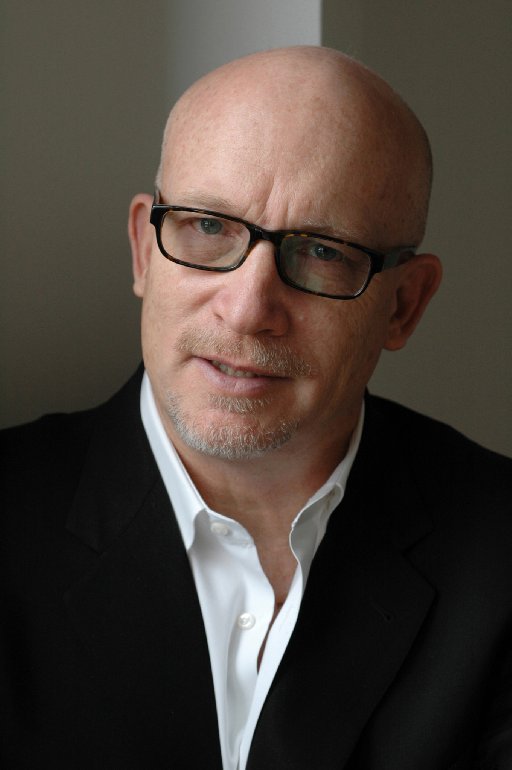 GOING CLEAR: SCIENTOLOGY AND THE PRISON OF BELIEF, the new documentary from the prolific and generally on-the-mark filmmaker Alex Gibney (shown at right, who has formerly skewered everything from Enron and our mideast wars to Jack Abramoff and the Catholic clergy), offers a two-hour crash course in what you need to know to stay away from this crazy cult. His film is well made and features a look at a number of folk -- from the famous to the not so -- who've bought into Scientology's "beliefs" only to eventually leave, disheartened and much the poorer (in ways both financial and spiritual). Gibney also piles up his evidence (often anecdotal, yes, but with plenty of history, statistics and even the so-called "ideas" from the "religion's" founder, L. Ron Hubbard, to back it up), before finally lay out as close to an ironclad case for fraud and fakery as any intelligent non-brainwashed viewer could want. 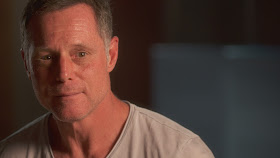 Of course, the documentary gives us a lot of John Travolta and Tom Cruise -- two Scientology stalwarts, whom the doc shows have shamefully allowed this cult to use their image for proselytizing, marketing and near-destruction -- but also lesser-known lights of Hollywood like actor Jason Beghe (above) and writer/director Paul Haggis (below) who were for years in thrall to the powerful group. 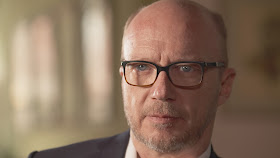 We also hear from people like Travolta's assistant, Sylvia "Spanky" Taylor, below, who had to flee with her very young child (whom the cult had reduced to sick-unto-death) and Hana Eltringham, who, as a very young woman, got sucked into things and only recently, as a senior citizen, came out the other side. 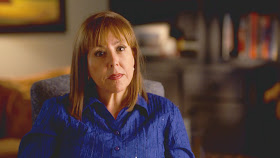 Gibney, as did author Lawrence Wright, in his book of nearly the same name from which the film has been adapted (Wright's subtitle, interestingly enough, was Scientology, Hollywood, & the Prison of Belief), also follows the money -- and we soon see where it has come from and to where it has led. The section involving Scientology lawsuits and the F.B.I. investigation proves, on its own, nearly shocking enough to seal the entire deal. 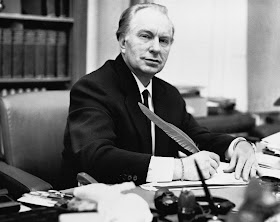 We get quite a history of that Hubbard guy, above, especially from his ex-wife and mother of Hubbard's child. This section brought to my mind another "religious" leader -- Mary Baker Eddy, founder of the Church of Christ, Scientist (the religion that I was born and raised into), and Mrs. Eddy's own quite checkered history, which the Christian Science church has long done everything it could to conceal. Supposed religious "icons" rarely if ever stand up to close scrutiny -- except in the minds of their often brainwashed followers. 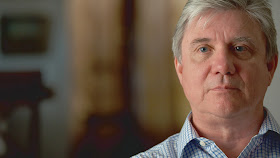 Some of the movie's most interesting sections deal with those at the top of the Scientology food chain, specifically its current leader David Miscavige and one of his former henchman, a fellow named Mike, shown above, who has since left the "church."  Here we learn about the infamous "disconnects"  that members are forced to take from their families, as well as many of the dirty tricks played against those with the audacity to leave the fold, as well as against others in order to "blackmail" them into staying (this theory certainly might apply to Mr. Travolta's continued presence). 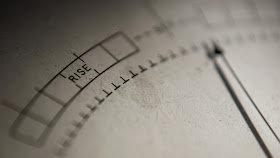 Among the more gossipy bits of information involve the search, discovery and training of a new girlfriend for Mr. Cruise. This is lightweight compared to most of what we learn here, but it, too, helps complete a tawdry pattern. All told, Going Clear (the title is Scientology-speak for arriving at one of the higher levels of the "religion," which is, as one fellow tells us, "full of crushing certainty that allows not a trace of doubt." Any philosophy or religion that doesn't encourage a little doubt now and then is already highly suspect. 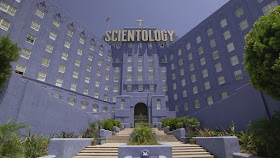 Going Clear: Scientology and the Prison of Belief will open in theaters this Friday, March 13th -- in New York at Lincoln Center’s Walter Reade Theater, in Los Angeles at the Arclight Hollywood, in San Francisco at the Presidio Theatre, and will then make its prime-time cable debut on Sunday, March 29 (8:00-10:00 p.m. ET/PT), exclusively on HBO.
TrustMovies at 5:55 PM
Share