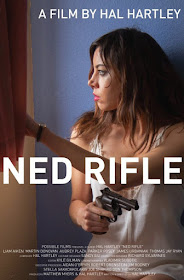 Despite all the acclaim (mine included) for Richard Linklater's 12-year project, Boyhood, and his three-part, follow-the-characters-through-the-decades "Before" series, not so much is made of the very interesting and decidedly off-kilter trilogy that now completes itself with the simultaneous theatrical and digital opening of NED RIFLE, the third part of the trilogy that began with the brilliant Henry Fool, continued with the not quite so fine Fay Grim, and now concludes -- at least, according to what its filmmaker, Hal Hartley, tells us -- with this new work. 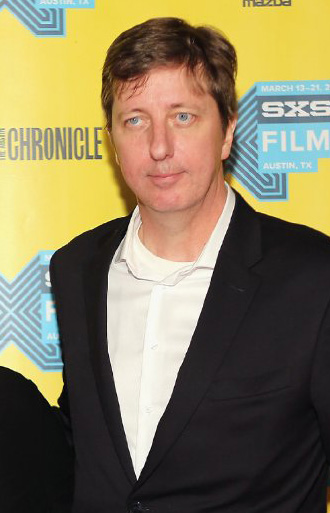 This lack of critical acclaim may be because Hartley (at right) is even more "independent," loosey-goosey and out of the mainstream than is Linklater. His work over the decades (his full-length film debut was 1989's The Unbelievable Truth) has ranged pretty far afield, with Henry Fool being perhaps his most accessible and popular work -- and that is still nowhere near mainstream. Even when he's seemingly out to lunch (as with the oddball Girl From Monday), there's still plenty going on. I find Hartley's work worth watching, no matter what, and this is particularly evident in this fine trilogy. 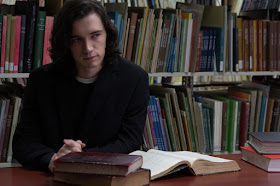 It's been well over a decade since I revisited Henry Fool and maybe five years since Fay Grim (the eponymous characters for which the first and second film are named. Ned Rifle -- also eponymous -- turns out to be the son of the aforementioned pair, and this movie is his story. 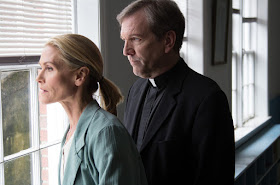 As played again by Liam Aiken (two photos above), who has grown some since the second film -- these characters age realistically and believably from movie to movie -- Ned, with his mom in prison and his dad forever on the run, has been in some sort of witness-protection program, living as part of a very a church-going family, in which Dad (Hartley regular, Martin Donovan, above, right) is the local preacher. 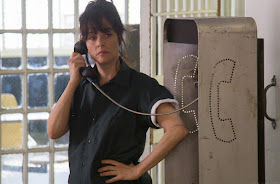 Back again, too is Parker Posey (above) as Ned's mom, along with the driving force of the trilogy, Thomas Jay Ryan as dad Henry (below), who had too small a role in the middle movie. Also on board is the wonderful James Urbaniak (two photos below), reprising his role as Simon Grim. 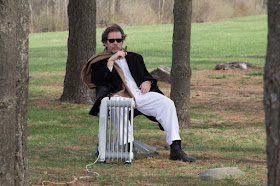 From the start of Ned Rifle, we're besieged with god, prayer, terrorism, witness protection, and a plan for murder. Hatley's plot machinations are witty and smart, and his peculiar style of weighty-subjects-done-deadpan is exactly right. In this film, he takes in the modern world, including blogs, the web and credit-card tracking in ways that are humorous if not always completely believable. But he is after bigger game, and he often manages to catch it. 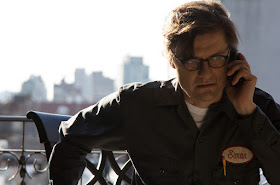 The filmmaker treats things we generally laugh at or pooh-pooh as worth at least considering honestly. His film is also full of fraught reunions executed in small, precise, dry and alternately funny and moving scenes. Ned Rifle builds in humor and suspense, and yes, there are a gun and a knife present -- both given their Chekhovian due. 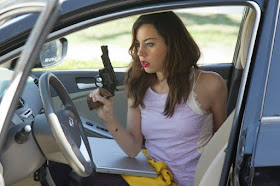 New to this film, and so very good that she ought to become an immediate member of the Hartley acting stable, is Aubrey Plaza (above and below) who plays Susan Weber, a lady with connections to just about every other character in the film. Ms Plaza is near-perfection: the central figure in an array of characters that is indeed something to see. 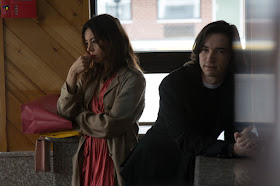 The suspense, smiles and shocks build, and then -- suddenly it's all over. Too fast. I'd like to say More, please, but Hartley has told us there will be nothing further, at least so far as these characters are concerned. Too bad. For now, though, at least we have the joys of Ned Rifle. And while there is nothing here as amazing as that final scene in Henry Fool of running (toward or away, and does it even matter?), this final segment connects us so fully to that earlier film that we can only be thankful. (Grateful, too, for the wonderful music score -- by Hartley himself.) 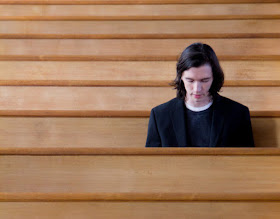 Ned Rifle -- from Vimeo on Demand and running only 85 minutes (considerably shorter than the first two in this series) -- will open theatrically on Wednesday, April 1 in NYC (at the IFC Center) as well as via Vimeo On Demand. On Friday, April 3, the film will open in L.A. (at the CineFamily), San Francisco (at The Roxie), and Toronto (at The Royal), and then branch out on Friday April 10 to Boston/Cambridge (at The Brattle), Huntington, NY (at Cinema Arts Center), Seattle (at SIFF Center) and Portland, Oregon (at The Laurelhurst).
TrustMovies at 5:55 AM
Share