Parade's End -- an acquired taste. (Scroll down for the companion review of Downton Abbey)


This post is written by our "Sunday Corner"
corresponent, Lee Liberman 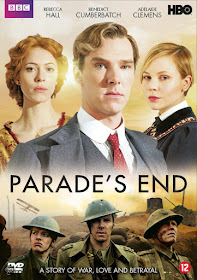 Parade's End (BBC/HBO), a psychological drama, and cream puffy Downton Abbey (PBS) treat the effects of world war and industrialization on tradition-bound Edwardians, especially on women. Parade's End, in 5 episodes based on novels by Ford Madox Ford, is a tougher go; it takes a few takes to dig itself into your heart, but the payoff is far more interesting -- you feel world war shaking the ground and savor a bit of well-earned joy as the parade ends. Despite excellent reviews here, the series, directed by Susanna White, slipped under the radar quickly but was widely celebrated and honored across the pond. 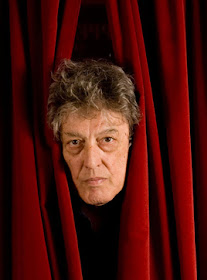 Tom Stoppard (prolific playwright, screen-writer) can't have had a simple time distilling Ford Madox Ford's four-novel series because the work unfolds in non-linear fashion, jumping around dizzily. Written close to the period, the novels were called by poet W.H. Auden and others 'great', but they aren't easy -- as though Ford meant his work to be as contrary as he made his characters. The first go at the mini-series is also off-putting. I didn't get into it until the re-watch; then became engrossed in the story of the protagonists and also their being metaphor for the bloom being off the rose of the aristocracy. It did help to know where the story was headed before focusing on how the words and actions of the characters contribute to the synergy of the whole. 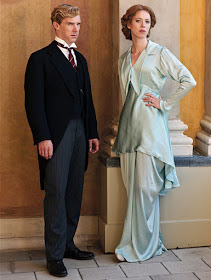 The antiheroes of the drama are Christopher and Sylvia Tietgens, a miserably-married aristocratic couple whom anyone will recognize who has encountered a relationship in which the parties don't get each other, talk past each other, relentlessly disappoint, and make each other angry or depressed. Yes, toxic, but Christopher and Sylvia turn each other on -- he thinks she is "glorious" and his braininess and impeccable taste have spoiled her for other men. Sylvia wants to keep her husband but cannot help repelling him. Duty compels him to wear the hair shirt: 'I stand for monogamy and chastity and not talking about it,' he says. Benedict Cumberbatch (at far left) is so quietly, deeply expres-sive that Christopher's suffering is palpable -- his 'romantic feudalism', his nostalgia for a time of 'rights, duties, and supposed orderliness' (Julian Barnes, the Guardian, 8/2012) making him a dinosaur in his own time. (Press here for Barnes's rich analysis of Ford's characters.)

Sylvia (the beautiful, formidable Rebecca Hall, above, right), acts out the narcissism of the aristocracy with the seductive charm of a sociopath. Her mother (Janet McTeer) calls her manipulative behavior 'pulling the strings of the shower bath'. Christopher, an intellectual savant, shoulders the guilt and unhappiness of an aristocracy that is becoming anachronistic. Although brilliant, he nevertheless courts failure through one self-deprecating act after another. He works at the Imperial Department of Statistics and perfectly predicts the outbreak of war. But when asked to manipulate data, he quits, deeply offended, and joins the army. Through the war years, Sylvia's sadistic antics and Christopher's own self-effacement conspire to ruin his reputation. He is banned from his club and sent down to a combat unit at the front. 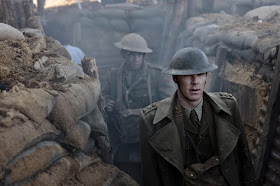 Appearing early but not often in the story is young, brainy suffragette, Valentine, (Adelaide Clemens, below, right), middle-class daughter of a classics professor and journalist mother (Miranda Richardson at her most winsome). Christopher and Valentine meet for the first time on a golf course where she and a friend are demonstrating for the vote among 'fat golfing idiots' (whose own view is that suffragettes are whores and deserve to have their bare bottoms spanked). Christopher chivalrously foils arrest of the girls by heaving his clubs in the way of a police officer who is giving chase. In this and later brief chaste encounters, we see the exact opposite of mutual repulsion. Christopher and Valentine "get" each other, make each other think, and disagree amiably. Their fresh good will is hope for the future, but he is not ready to shed his old-fashioned honor. 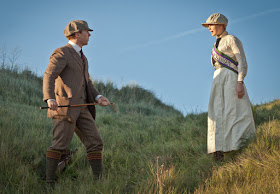 Honoring the rules of the 'parade' of the social elite (aggressively flouted by Sylvia), Christopher does not take up with Valentine until the war has dragged on, his parents have died of disappointment, and Sylvia has exhausted him with histrionics. The last straw is her having the ancient tree at Groby Hall felled because it darkens the parlor. (Groby, the Tietgens family seat in Yorkshire, is 'older than Protestantism'.) In a decisive change in behavior, Christopher dismisses Sylvia with an unforgiving stare and throws a log from the old tree on the fire. Peace is declared, the troops are released, and in the final frames Christopher is at last happy as he finally joins his heart with Valentine. 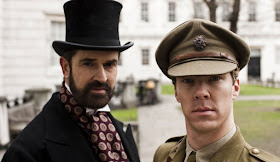 More British acting elite add depth to the parade, among them are Rufus Sewell, a batty cleric; Rupert Everett, Christopher's older brother (above, left), who lives with his mistress and wants no part of Groby; and Anne-Marie Duff (below, left) as whiny Edith, a middle-class snob who has snared Macmaster, (Stephen Graham, below, right), a writer, to enhance her social climb among the literati. 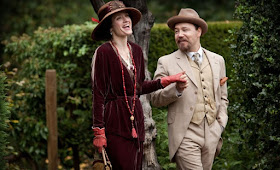 Parade's End is streaming on HBO; it's worth the work. 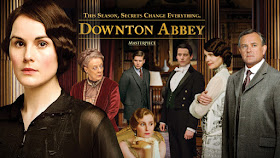 Compared to Parade's End, the PBS series DOWNTON ABBEY is the soap opera version of the cracking Edwardian facade during and after WWI. Created by Julian Fellowes, shown below, Season 5 has ended and season 6 ordered -- could be the place to stop. 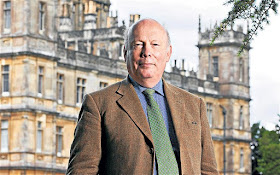 Lord Grantham (Hugh Bonneville), hapless head of the aristocratic Crawley family, broods over the inability of his land-rich, cash-poor estate to support itself. Fortunately his modern daughter Mary (Michelle Dockery) is able to walk the line between appreciating papa's decency and prodding him toward running the estate like a business. The growing assertiveness of women in the new century is punctuated by daughter Sybil (Jessica Brown Findlay) running off with the chauffeur, cousin Rose (Lily James) falling for a black jazz musician followed by snagging a Jewish banker-- at least avoiding an interracial scandal.

But an hour special that ran on PBS at the start of Season 5 spelled out the premier obsession of this series: 'The Manners of Downton Abbey' (for sale at PBS). The host, Alastair Bruce, historian and consultant, bobs about the film set adjusting posture, bits of dialogue, and scene to assure perfect replication of the ballet of manners that dictated daily life of the Edwardian elite upstairs and staff downstairs. 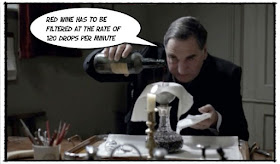 Bruce explains that the aristocracy were so traumatized by contageous disease and the violence of the French Revolution that habits of restrained physical contact and emotion even among family solidified into protocol. The Edwardians enveloped themselves in a complexity of nuanced formalities, insulating them from change. Dowager Countess Violet (Maggie Smith, below), Butler Carson (Jim Carter), and Lord Grantham keep the flame, resisting slippage of the status quo. 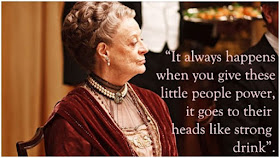 There are few if any story lines in Downton that do not revolve the Edwardian code in one way or another. One stays tuned to find out what's coming next (or what Violet will say next). Soap opera is geared to the gossip gene or the ginned-up fear response as plots charge to and fro, anticipating a favorite character's horrible dilemma. All the talk, tears, wit. joy, grief at Downton Abbey are skin deep. In season 5, the only character whose painful struggle (with his sexuality) makes us care is Thomas, the devious under-butler, played by marvelous actor Rob James-Collier (below), who is owed lead roles as soon as possible. There is something behind those eyes, and you want more. 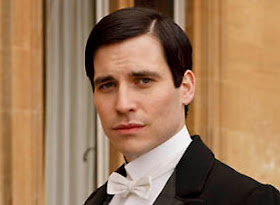 DA's success is aided by "camp and class", said one reviewer; it surely is beautiful and fans feel elevated by its British toniness (reputedly some royals tune in). Perhaps one more season is enough, though, as plots are repeating themselves and going stale. It is quite a contrast to feature-film who-done-it, Gosford Park, also scripted by Fellowes. But Gosford had director, Robert Altman, who, like great writers, make us care about the inner life and motivations of characters. Taking place during a weekend gathering at a country estate, a murder is committed by a character whose pain we begin to understand and share as the crime is solved. At Gosford Park, as in Parade's End, we are slowly drawn into the inner lives of a number of characters. Parade's End and Gosford Park can be mined over and again; repeat visits to Downton offer thin gruel. 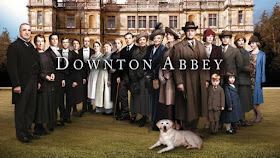 Downtown Abbey Season 5 will be available for a short time on line at PBS. Only the first four seasons are available on DVD in the NTSC version compatible with our DVD players, but for those who own an all-region player, the UK version of Season 5 is now for sale. (It can't be long before Season 5 is available here, too.)
TrustMovies at 1:11 PM
Share