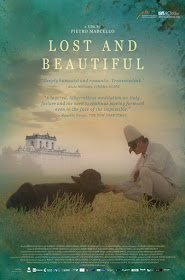 TrustMovies apologizes in advance for this review not being able to live up to the level of the film under consideration: LOST AND BEAUTIFUL (Bella e perduta) by a young filmmaker, Pietro Marcello (shown below), whose work -- based on the two films of his I've so far seen -- is as unusual and hybrid as that of any documentary filmmaker I've yet encountered. It is also quietly commanding, strangely appealing and hugely generous to both its subjects and us viewers. 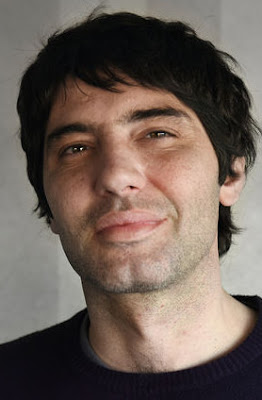 To be able to somehow capture with our words the strength and art of the movies we are reviewing is, I would think, the goal of many of us critics. This is difficult to do with good films, let alone great ones. But when a film comes along that weaves together documentary and narrative using resources that consistently surprise and confuse yet somehow builds and coalesces until you realize that, yes, you do understand (and yet you don't understand quite how you've been able to make this leap), well... good luck in finding the right words to describe your experience. 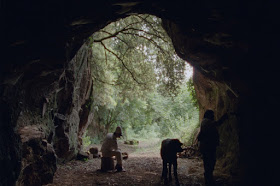 I first saw Signore Marcello's film The Mouth of the Wolf at the Film Society of Lincoln Center's Open Roads series of new Italian films in 2010. I was blown away by that film and am once again by Lost and Beautiful, which I find even more difficult and yet even more rewarding. 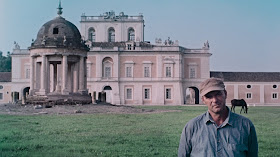 It will help if you already possess a love for (and some knowledge of) Italy and its culture and history. Otherwise, the film might simply seem too "foreign." Even then, the manner in which Marcello has envisioned and organized his movie -- using a bizarre blend of Commedia dell'arte figures, narration that comes via a Campanian (Campagnian? Anyway, he is from Campagna) buffalo (yes!), whom we see grow from calf to adulthood, and a very loose history of the recent years of the once-famous Carditello Palace (above) and the man named Tommaso (also above) who took it upon himself to revivify that palace -- despite complete lack of interest by the government and threats from the local Camorra (the Mafia in Southern Italy) -- and who died trying. 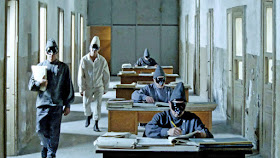 Yes, this is a lot to put on the plate of any moviegoer. And while Marcello's film is unspooling, it does seem all over the place, flashing back and forth, using archival footage (below) and maybe even some made-to-seem archival material, taking us from those old Italian theatrical characters (above) to Tommaso, with that buffalo ever front and center, telling his story with a flair for philosophy and irony, humor and sadness. (That fine Italian actor Elio Germano provides the voice of the buffalo.) 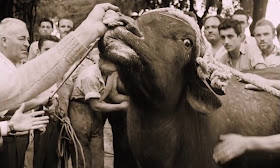 I am not sure that Marcello set out to make an animal rights movie, but along with everything else he accomplishes, he manages this as well as any film I've seen. Along the way we view Pulcinella (the famous Commedia dell'arte character), with his mask and without, ministering unto that buffalo, and maybe falling in love with a local woman. We meet shepherds and see the Italian locals take to the streets with placards reading "The Camorra is honest!  The State steals money!" Welcome to the world of Donald Trump. (Well, consider that Italians elected and then even re-elected Silvio Berlusconi, a Trump-twat to the max.) 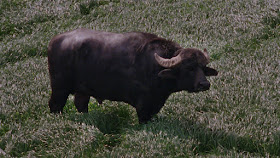 And yet what consistently builds here is a love for the land, for the livestock, and for the people who work for the betterment of the world, despite the huge obstacles constantly in their path. Marcello's musical choices are exactly right, too -- from the classical to those composed for the movie. Lost and Beautiful may remind you of Bresson's Au Hasard Bathhazar, though it is less rigorously Bressonian and more whimsical, romantic and full of the beauty and sadness of life. 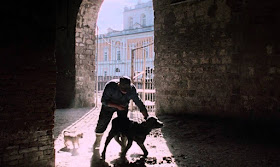 The finale offers as much meaning and emotion as any film you could want. It's a ten-hanky movie that sneaks up on you: One minute you are still questioning its meaning(s) and the next you're in tears and you understand. Well, fuck it. I am making a mash of all this. But I did warn you. I don't know that I can even recommend this strange hybrid documentary for fear that I am expecting too much of you and yet have not given you enough in this review.  (But, gosh, just for the scenes of those puppies cavorting with that buffalo calf....) 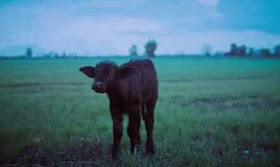 From Grasshopper Film, in Italian with English subtitles and running a mere 88 minutes, Lost and Beautiful opens tomorrow, Friday, December 9, at the Film Society of Lincoln Center and then at another five locations across the country. To view all currently scheduled playdates and cities, click here and then scroll down and click on Where to View.
TrustMovies at 5:55 PM
Share