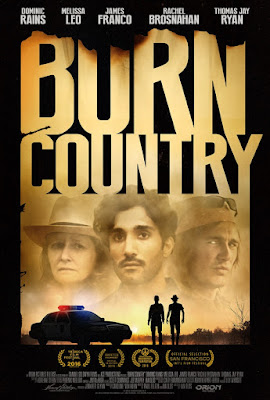 A fish-way-out-of-water story, BURN COUNTRY -- the first full-length narrative film from Ian Olds -- proves better at enticing us in than it does fulfilling its promise once we become involved in the tale. And yet that may be part (maybe the whole point) of the tale: How very strange it is to try to enter and then correctly appraise the world of people you barely know, who may, in fact, not want you in their world, after all. That is the situation of our protagonist, a young Afghan fellow named Osman (played very well by Dominic Rains, shown below). 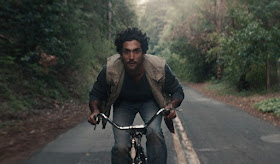 Osman worked, expertly it seems, as a translator for a U.S. journalist whose beat is in the middle east, and because of this has been given asylum in the United States. He is now located in the backwoods of Northern California, visiting/living with the mother of that journalist (the fine Melissa Leo, shown below) and expecting to find a job at the local newspaper. 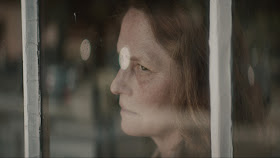 That job works out, sort of, but not in the manner Osman was expecting, and little by little he meets the townsfolk and becomes involved in some very bizarre doings: arson, beatings, a disappearance and a possible murder. Exactly what happens, along with how and why, we piece together haltingly, just as Osman himself must do, and the biggest strength of Mr. Olds' movie (the filmmaker is shown at bottom) is that we see and know only what Osman himself learns about this whole mess.

Along the way, Osman sees his first sight of the ocean and a beach, gets involved with a pretty young woman (Rachel Brosnahan, in the penultimate photo, below) and her rather bizarre acting instructor, and meets, gets beaten up and then befriended by a guy named Lindsay (James Franco, below and further below, doing another good job in full-out weirdo mode). 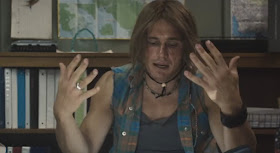 More and more bizarre and unsettling do things appear until we and Osman are ready to think the very worst of America's small towns (and why not, as these people apparently elected the asshole of all time to become the next American President?). 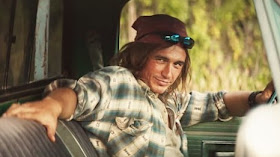 Things do sort themselves out. Sort of. Which leaves us even more unsettled -- with only some understanding of what has just transpired. One of the townsfolk lets us and Osman know that, in this a particular area of the country, everything is eventually forgiven. Well, OK.

Meanwhile, Osman has been in touch via phone with his journalist mentor along the way, and the final scene -- a quiet beauty of a few moments -- should make viewers appreciate Afghanistan in a manner we would never have expected. 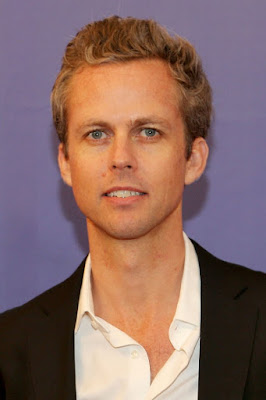 While I cannot wholeheartedly recommend Burn Country, except to an audience who especially appreciates the intentionally unclear/ambivalent, there is certainly enough here to mull over, chew and maybe even digest. In the cast are stalwarts like Thomas Jay Ryan, too, so that's a plus, while Mr. Rains, who won a Tribeca Festival Best Actor Award delivers in fine form.

From Samuel Goldwyn Films and Orion Pictures, the movie, running 102 minutes, opens this Friday, December 9, in Los Angeles at the Laemmle's Monica Film Center. Elsewhere? No idea. But as it will simultaneously play VOD in most major markets, if you want to view it, I am sure you'll be able to find it.
TrustMovies at 7:47 PM
Share