Talk-back to an Oscar winner: Keiko Yagi's doc, BEHIND THE COVE, opens in Los Angeles 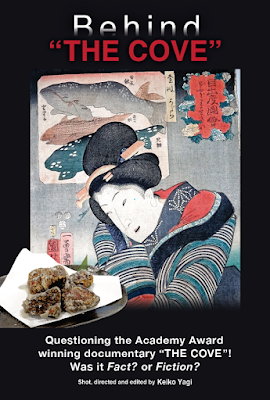 A "whale" of a tale that, unfortunately, should have been about dolphins instead -- if only the movie-maker here, a certain young woman named Keiko Yagi, had even a remote clue as to what she was doing -- BEHIND THE COVE supposedly sets out to get at the truth behind the Oscar-winning documentary, The Cove, which, according to just about all the folk interviewed in this film, is a lie. And why is it a lie? Mostly because one of the Japanese gentlemen interviewed in The Cove was said to have been fired, but, lo, it indeed appears that he is still working at his job. Wow. That's some major undercover work, Ms Yagi! 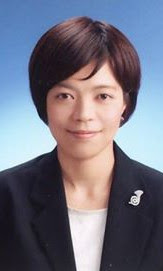 The filmmaker of this embarrassing endeavor, shown at left, makes her exposé all about whaling. But The Cove was all about dolphin slaughter. Sure, there's a connection between the two, but Yagi doesn't bother to make much of it in her documentary, which is rambling, all-over-the-place, and will have you consistently asking, why-in-hell-is-she-showing us-these-boring-and-unimportant-shots (as below)?  In fact, she practically leaves dolphins out of her film altogether. Did she not actually even bother to see The Cove?  Sure, there are major cultural differences between the U.S. and Japan, but was it that impossible for Yagi to address the actual issues raised by The Cove? 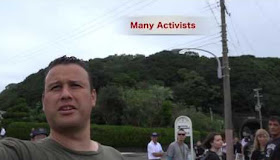 There is an increasingly anti-American slant to Yagi's movie, which comes to its conclusion by showing us the havoc wreaked upon Hiroshima and Nagasaki by America's use of the Atomic bombs. She'll get no argument from me as to America's horrific misuse of its power, back then, as ever. (Iraq, anyone?) But what major power, east or west, does not misuse its strength to gain further power? 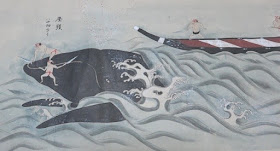 Yes, America has helped level on Japan heavy-duty sanctions against the latter's whaling industry, and Yagi rightly shows how Japan's history and whaling have been joined at the hip for centuries. This is indeed unfair, but it has little to do with the veracity of The Cove. (Nor does the fact that the U.S. has persecuted filmmakers like Charlie Chaplin -- but, yes, we are told that, here, too.) Paranoia, conspiracy and hypocrisy reign, probably with some good reason. But they do not provide much help for Yagi's case. 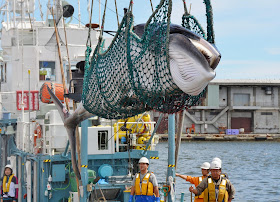 The problem here is that this young filmmaker is utterly sloppy about everything from organization to statistics to subtitling. Charts that we are shown appear to contradict what we are simultaneously being told, and the subtitles have either been very poorly translated (or maybe just atrociously proofread). And while you may come away from this movie feeling that, yes, the Japanese ought to be able to eat their whale meat -- just as U.S. citizens eat their pork, chicken and beef --  you will not be convinced that The Cove was in any way wrong regarding its view of the dolphin slaughter in that Japanese seaside city.

After opening in New York City last week (to only one review -- a dreadful one, too -- in the Village Voice),  Beyond The Cove opens in Los Angeles tomorrow, Friday, December 2, for a week's run at Laemmle's Music Hall 3.  Trust Movies is all for considering alternate viewpoints to conventional wisdom. But this "alternate" is one of the worst and least professional documentaries I've seen in years. In the press release, it is noted that Ms Yagi is often told that she doesn't look and think like a Japanese. I would add that she doesn't think like an authentic filmmaker, either.
TrustMovies at 6:36 PM
Share