The below is written by our monthly correspondent, Lee Liberman 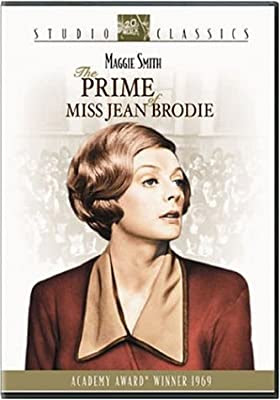 Having missed THE PRIME OF MISS JEAN BRODIE in both novel (1960) and film form (1969), now streaming on HBO max, I find that it chimes perfectly with the ascent of the authoritarian. Miss Brodie does not loom over a stage that signifies at large, she’s one of those locals who simply must rule the roost. 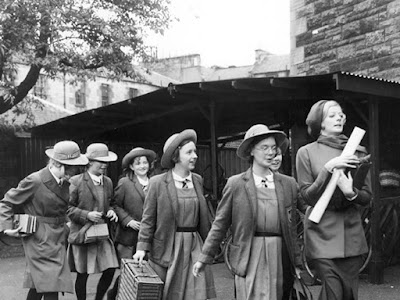 Miss Brodie cultivates followers as a tiny cult, a squad of elites — both an object of their worship and an adoring acolyte herself, swooning over foreign strongmen. 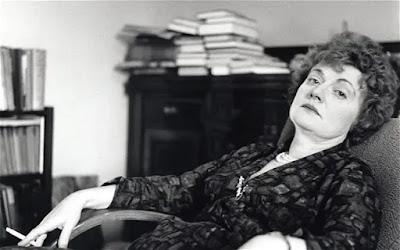 Author Muriel Spark’s small tome was designated (2015) one of the 100 top novels in English. Miss Brodie was her ‘milch’ cow, she said — it kept giving back in fame and remuneration. It has also generated scholarship — one interest niche being the topic of religion, especially stern Calvinism vs a kinder Catholicism.
Spark herself (above) was half-Jewish and the family attended synagogue; as an adult she went to protestant services and converted to Catholicism in 1954. Calvinism is particular in its holding to predestination; people are fallen, then saved, not through their own merits but through election by a higher power— this aspect attracting leaders who are authoritarian or cultist (see Sister Alice in HBO’s Perry Mason). Catholicism espouses free will and redemption through choice (and shock — the Pope just endorsed same sex civil union). Miss Brodie, thought to be Calvinist, anointed herself a power able to confer merit on her girls. BUT NEVER MIND RELIGION and how Muriel Spark’s conversion to Catholicism may have led her to doom Miss Brodie to fall from polite society. More recent social analysis pegs Miss Brodie as a plain old authoritarian and/or malignant narcissist, the sort who requires a stage, a podium, and worship. Miss Brodie’s paramour, married art teacher Mr. Lloyd, for instance, was her supplicant. Everybody Mr.Lloyd paints, even his family, look like Miss Brodie, says one of her brood—“if you were to paint the Brodie girls we’d all look like one big Brodie…”. 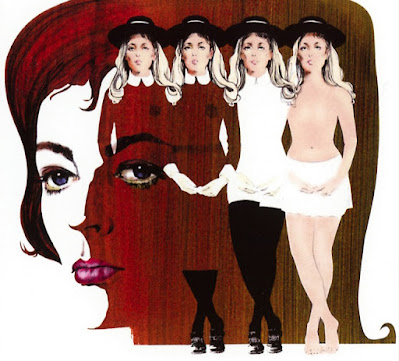 Spark sets her novel between the two great wars as fascism was rising in Europe, leading to states emulating Hitler like Franco in Spain and Mussolini in Italy. Miss Jean, in her self-designated “prime” is an unmarried teacher in her 30’s and simply full of herself — a self she sought to confer on certain students at a private girls school in Edinburgh, Scotland. She says: “I am putting old heads on your young shoulders and all of my pupils are the creme de la creme.” In fact she wants them to be her. Ignoring the school’s curriculum, she waxes on with imperious histrionics about art, politics, and love, as though her singular vision were worthy of worship. She exudes the Trumpian “warm glow” of self-congratulation. 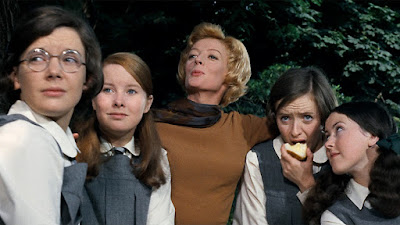 As Miss Brodie’s girls move on to higher grades, their personal connection with her remains; several have spied on her romances — her attraction to the married art teacher, Mr. Lloyd ( below) then later as she turns to a more achievable prospect, the music director, Mr. Lowther, a landed gent with an estate (a candidate for marriage). 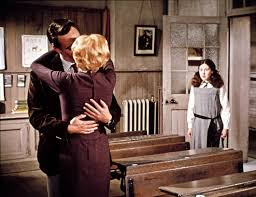 One of the girls, the jealous one, ultimately offers ammunition the headmistress can use to fire the annoying disrupter. Miss Brodie is canned not because of the drama involving sticky relationships with two male teachers, but more documentable political incorrectness — her classroom espousal of fascism in a growing anti-Hitler environment. The girl who gave her away was not driven by Miss Brodie’s politics, per say, but by her cult-like hold over her young pets. It led one of them to run off to Spain and die fighting for strongman Franco. “I didn’t betray you — I simply put a stop to you,” the betrayer tells Miss Brodie, having seen the lethal effects her hold had on her acolytes. It’s now down to US voters to take down our own false prophet. 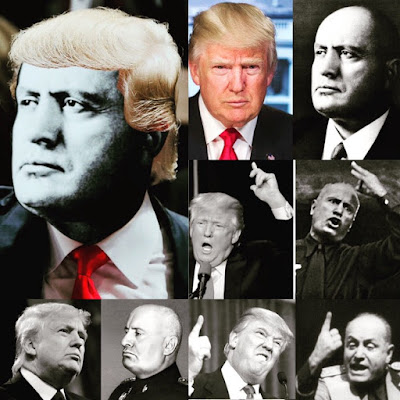 Miss Brodie was writ large by Maggie Smith in the 1969 film that won her an academy award (she was designated ‘dame’ by the Queen in 1990). It was a sharply funny tour de force, ironic, satiric, a marvel of perfect timing and glorious acting, a stunning portrayal of ‘malignant narcissism’. Dame Maggie’s acting chops are evident in her Downton Abbey role as the indomitable Dowager Duchess of Grantham, played lately in her mid-80’s, except that provocateur Violet was repeatedly a force for conciliation and reconciliation, quite unlike Miss Brodie.

In the 1960’s, Smith was a classic beauty just right to flaunt Miss Brodie’s (and her own) perfection. Her girls, the “Brodie set”, were her fascisti. “...the fascist Jean Brodie steals her students’ lives, predicting and trying to control their life trajectory...a sorry record of stolen lives into which she inserts her own personal drama.” * 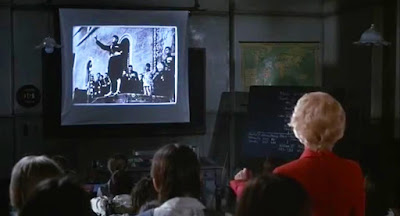 Says Miss Brodie: “I will show you some more slides of my last holiday in Italy — Rome: This slide, (above) is a large formation of Il Duce’s fascisti. They are following him in noble destiny. I myself mingled with such a crowd. I wore my silk dress with red poppies, which is right for my coloring. Benito Mussolini, Il Duce, Italy's leader supreme, a Roman worthy of his heritage, is the greatest Roman of them all.”

Narcissist cult leaders have in common charisma that disturbs, bad effects on followers, and unpredictability. They create chaos to stay in control. Watching Maggie Smith’s histrionic, unselfaware Miss Brodie, you feel like you’ve seen that — an inflated form of it — every day for the last 5 years. It calls for our duce, like other high flying despots, to have his fall, and also to savor that a great story can signify more today than it did yesterday. (Below, l, Trump, Hitler, Mussolini, Stalin). 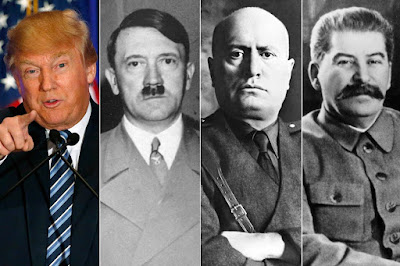