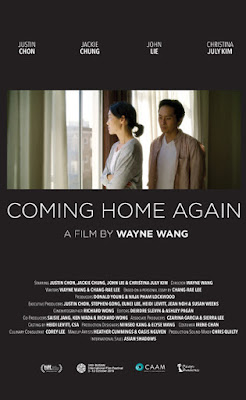 For those of us who've wondered why the career of Wayne Wang (Chan Is Missing, The Joy Luck Club) has never taken off the way we imagined it might (his two films preceding this one were never released theatrically here in the USA), look no further than his latest and, for my money, one of his worst, a tiresome downer entitled COMING HOME AGAIN. If that moniker sounds a tad generic, it's part and parcel of this slow-moving and obvious "art" film.

Wang is said to prefer quiet films (hey, TrustMovies does, too!) but that is hardly an excuse for making one that seems to revel in the predictable, giving us a tale taking place in the Korean-American community of San Francisco that deals with biggies such as family dynamics, death, religion and, yes, food and cooking. 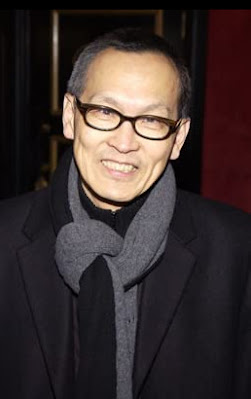 As a director, Mr. Wang (shown at left) has usually proven serviceable enough, though one might occasionally question, as here, his use choice of long shots, medium shots and close-ups. It's as a writer (with Chang-rae Lee, based on Mr. Lee's article for The New Yorker magazine) that Wang stumbles badly, offering up little more than a series of cliched incidents with dialog to match that give us the usual -- over and over again: distanced and angry mother, son, and daughter; barely-there father; and the usual death-and-dying routine (complete with vomiting, of course) that we've experienced on film time and again. The fact that these are Korean-Americans does not add much to the overall deal. Worst of all is the incredibly ridiculous exposition consistently ladled into the dialog.

Really: Would this son only now, at death's doorstep for his mom, be questioning her Korean history. Give us a break. Even given that the son was absent from the family for schooling, would he never have seen nor asked about those basketball trophies? Everything here seems too easy, too "planned." There is practically no character, let alone character development. After being with this "family" awhile, you really feel you need to introduce these people to each other. All is artsy/fartsy long takes with much staring sadly/angrily/meaningfully into the distance (by both the characters and the camera), until you just want to goose this movie into something, anything.

The single surprising scene arrives as a kind of climax, and it is creepy, crazy and near-hilarious. It certainly gives, at last, an outlet for what seems to be the unending, everlasting guilt with which these folk are evidently dealing. I am certain I am being way too hard on this little film which, given its depressing subject matter, won't be packing in the crowds (even virtually). But as a near-perfect example of a bad movie trying for some kind of art, Coming Home Again shines.

From Outsider Pictures, in English and Korean with English subtitles, and running 86 minutes, the movie premieres October 23 through Virtual Cinema and theater bookings in the U.S. and Canada, in partnership with Strand Releasing. Coming Home Again will not be on other streaming platforms until 2021.
TrustMovies at 10:10 AM
Share