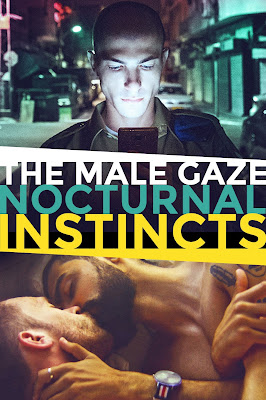 Don't give up on
THE MALE GAZE: NOCTURNAL INSTINCTS, the latest round-up of GLBT (this group completely G) short films, for although this collection begins badly, it slowly turns into something more interesting, ending up with one of the hottest, most extensively sexual pieces -- full-frontal with some semi-erections -- that I've encountered in all my New Queer Visions/NQV Media viewing so far.

The company's choice of films seems most often to prefer exploring ideas, feelings and character rather than merely soft-core, in-your-face sex scenes, though the latter is certainly appreciated when handled well. (And it certainly is in this compilation's final sequence.) 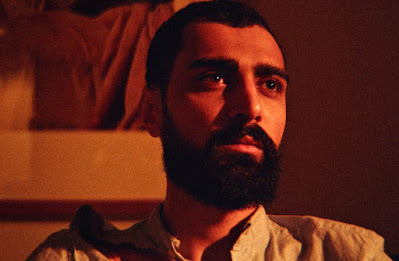 The initial 16-minute film, called SPIRAL, looks like nothing so much as an audition for a longer and undoubtedly grizzlier horror movie with the "unnecessary" stuff -- like, oh, character, ideas, even plot -- simply left out. So we get handsomely bearded faces, hot bodies, blood, very dark visuals but not much sense. Should the writer/director Gustave Olsson finally make that longer version, let's hope he adheres more closely to something rich and strange like Heartless, rather than to the more common slasher schlock that dots screens these days. 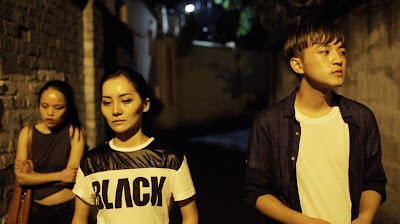 From sex in Sweden we move to copulation in China, where two drugged-up fellows rut like rabbits, after which one of them apparently dies. What to do?  The left-alive guy turns to two female friends for help, and a few further events take place, leaving us at the finale with a what-the-fuck? moment of a not-quite-complete-visual of which to make sense. FLOATING MELON, the 19-minute movie written and directed by a team of Spanish (Roberto F. Canuto) and Chinese (Xiaoxi Xu) filmmakers, slathers a little cultural/political history over its "story," and so proves at least slightly more interesting than its predecessor in the collection. 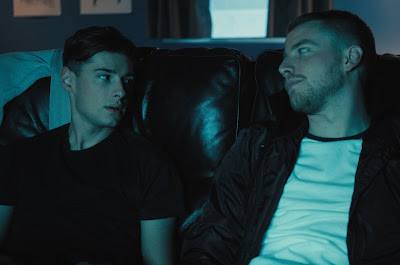 The third film proves better, simply because we have more of a sense of character and motivation with less melodrama. British filmmaker Dean Anderson's 17-minute, three-character POOF tells the story of Aaron, a young man who works in construction with his typically British, typically no-big-deal homophobic dad, who meets the slightly older Mike, a relatively stable gay guy clearly attracted to Aaron. Self-acceptance is the theme here, and it is played out with credibility and finesse. 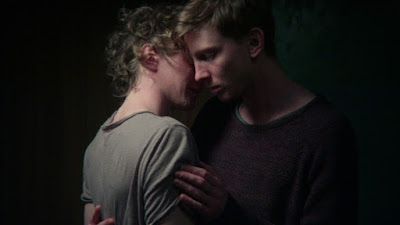 Self-acceptance is also the theme of the much darker 24-minute film, AFTER DAWN (Passée l'aube) in which it's the older man who's not come anywhere near fully to terms with his sexuality -- which has near-fatal results for the young man who is in love with him. As written and directed by Belgian-born Nicolas Graux, the film is sad and melancholy until it finally opens the door to the "closet," and we suddenly realize that this can also be a grave. 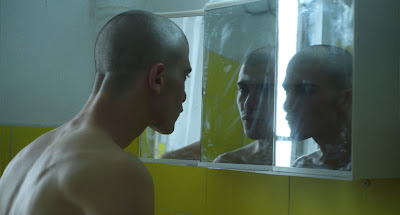 It's that final film, the 25-minute, NIGHT OF LOVE that certainly proves the most entertaining and maybe even the most fulfilling of these short films. As written and directed by Omri Loukas (above), who also stars in the lead role (note to Mr. Loukas: You are indeed adorable, but you might want to reconsider before placing that line of dialog, about you, into the mouth of one of the other characters), the movie tracks poor Yonathan, about to go into the army but, having been kicked out by his ex-boyfriend, needs a place to stay for the night. Mom's unavailable, Dad's unhelpful, and so our hero does one of those hook-up apps and finds himself the central attraction in a quintet of group sex. 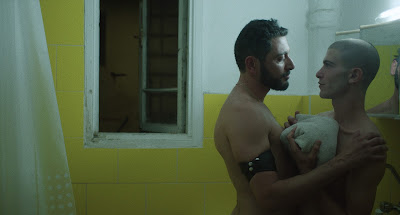 Though Mr. Loukas is the star, the main visual event here is Sasson Betzalel (above, left), who plays the very hot and hunky Palestinian in whose apartment all the romping takes place. Mr. Betzalel is more than generous in allowing us to view his body and sexual equipment, and he is also a good enough actor to convey the genuine feelings he has for Yonathan -- who certainly experiences more than expected from this "night of love."

From NQV Media, in various languages (all with English subtitles), and running 98 minutes, The Male Gaze: Nocturnal Instincts, is available now via digital streaming -- for rental or purchase. Click here for further information.
TrustMovies at 2:22 PM
Share