HAVE YOU HEARD FROM JOHANNESBURG: 8-1/2 hour, 3-part documentary event opens at Film Forum 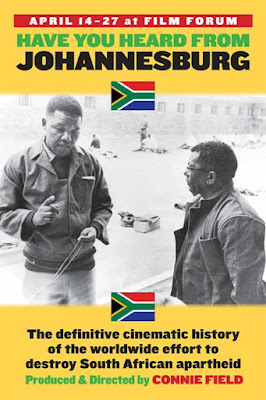 Think of it as a gift: Connie Field's consistently riveting, often moving and ever surprising series of seven separate films that, together, form an epic look at the worldwide movement, spanning nearly half a century, to abolish apartheid in South Africa. Mind you, TrustMovies says this, having seen only just over half (four-and-one half of its eight-and-one-half hours and four of the seven films) that make up this landmark documentary. 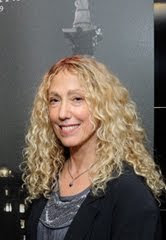 Ms Field (shown at right) earlier gave us the terrific Life and Times of Rosie the Riveter (1981), Freedom on My Mind (1994) and some other films that apparently were not much seen. Perhaps her latest work will garner the kind of success that allows those others (Salud, say, or Forever Activists: Stories from the Veterans of the Abraham Lincoln Brigade) to find a larger audience.

What Have You Heard From Johannesburg gives us is a history -- inside and outside the Apartheid regime -- that allows us to see what South Africa's Afrikaners, its Blacks (and its other two "colored" groupings), as well as the world at large, thought and felt about what was going on.  It does this via talking heads, but in this case, the same heads often span thirty or forty years. We see many of them as young people and also as aged seniors.  We explore Britain, Australia, Canada and New Zealand; many of the African countries (during the 1960s) as they shake off their colonizers; Scandinavia, Europe and the middle east, including Israel.  They're all here, especially the United Nations, the majority of whose members consistently vote against South Africa and its Aparthied regime, only to have the UN's powerful Security Council members continue to shore up the foul regime by voting against the majority membership.  One might conclude, as is often true regarding UN actions, that the organization was created to keep power in place and strengthen the status quo.

Amazingly, in those first four episodes, Ms Field covers a lot of ground but seldom repeats herself, even though she sometimes goes over the same time periods.  The reason is that she has chosen the theme for each section so well that instead of regur-
gitating information, one section complements another, elabora-
ting on it and allowing us to see the big picture in differing ways. 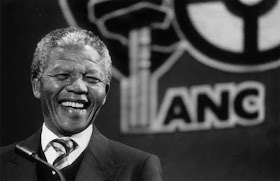 The film's first 65-minute section, The Road to Resistance, begins on a note of pure joy: the release from prison after 28 years of Nelson Mandela (above), who then begins his world tour.  From this, Field darts back to the creation of United Nations, as well as to the beginning of the implementation of Apartheid in South Africa, showing us how the protests of East Indians, who were subject to their own South African "color" classification, inspired the early Black protests.  We learn of George Houser, Walter Sisulu and the African National Congress, and the "Defiance Campaign" that led to the famous "treason" trial.

I dimly recall, amid all that was happening in the world during the 60s and 70s, the call to boycott South African products, but I learned here that this boycott went on for over thirty years -- beginning in the late 1950s with a few hundred people and growing  to 29 million by the late 1980s.  Britain appears to have been most involved in this from the start, and we hear the fiery speaker and Parliament member Barbara Castle urging Britons toward solidarity with South African Blacks.  It was this boycott and the news it made that sent journalists from across the world to South Africa to learn more.  Learn they did: It was then that the infamous Sharpeville Massacre, in which S.A. police opened fire on non-violent black protestors, killing 69 and bringing to the world's attention (like nothing previously had) the fruits of the Apartheid regime.  I also learned from this section that not all of the protesting was non-violent.  Post-massacre, a campaign of sabotage began, small scale to be sure, because of which the saboteurs were caught and tried. 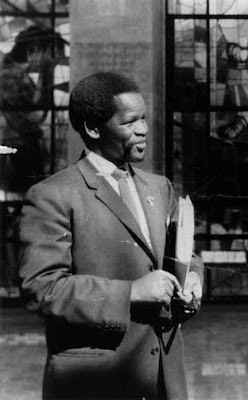 Episode two, Hell of a Job (no irony intended; there's no "Brownie" here), runs 58 minutes and tells of a towering figure of which many of us will not have heard: Oliver Tambo (shown at left), who, when the S.A. government banned the ANC, had to lead the movement from exile abroad in Britain.  Via old newsreels and clips, as well as many interviews, Field bring us up close to Mr Tambo, and a lovely experience it is to meet him.  Because, during this time, America, as a "friend" of the South African government, offered no help to the Anti-Apartheid movement -- and in fact used its Security Council vote to boycott the UN majority vote -- only the Soviet Union would supply major money and aid in the form of arms to the Anti-Apartheid movement. Because this happened during the continuing height of the Cold War, the U.S. saw to it that Tambo and his ANC were branded Communists, terrorists and the like.

One of the moving and surprising portions of this episode details how Tambo, a genuine Christian, had to shift from non-violence to violence -- and had to explain this move to his wife Adelaide.  Field takes us into Scandinavia, as Sweden stands against the US involvement in Vietnam then leads the way with financial contributions to the ANC, after which other European nations join in giving.  We also see some surprising divisions within the Christian Church between those who support the ANC (and other freedom fighter groups) and those who do not. 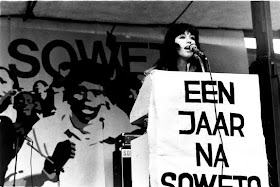 The third and final 58-minute episode in Part One, The New Generation, details those who came in their adulthood at the end of the 1960s.  Though we have seen this time period earlier, here, energized by the young who seem willing to tolerate no injustice, this episode is full of new ideas and possibilities.  One of these is the Black Consciousness Movement headed by Steven Biko, a name most of us will certainly remember.  The footage of Biko, together with the interviews with people who knew him, bring the 1970s back in all its turmoil and hope.

We also learn how the youth movement convinced the Anne Frank house in The Netherlands -- a popular tourist attraction for many South African whites -- to use flyers and propoganda comparing Nazi Germany to the South African Apartheid government.  This section also explores the sleazy link between South Africa's ex-Nazi-sympathizing  Prime Minister John Vorster and Israel.  And though our own President Jimmy Carter sends Andrew Young to the UN as our Ambassador, once again, when the call for economic sanctions against South Africa is put to a vote, the US boycotts the UN's majority.  Youth and its boundless energy, it seems, is not always enough.

Part Two begins with the 95-minute episode Fair Play, detailing how an international boycott against South Africa's whites-only sports teams (which TrustMovies -- despite his general antipathy toward sports -- found the most involving of the entire series so far) proved a surprisingly effective way to call attention to and win support for the anti-Apartheid movement.  "You can't mix sports with politics."  That refrain is heard over and over during this episode, and is met quite smartly with "Why not?"  Particularly when "politics," in this case, means the killing of innocents. 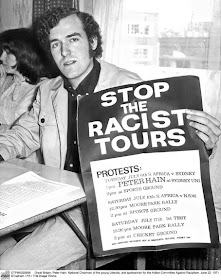 Sports also, as many of the people Field interviews point out, is dedicated to the notion that the best man or woman should win.  But when the team is rigged to exclude all those of color, this notion gets dirtied rather badly.  In this particularly bracing episode, we follow protests and boycotts at several of the Olympic Games, noticing that countries-of-color often objected to South Africa's treatment of Blacks, while it seems that white countries didn't care so much.  We hear from Peter Hain (shown above), a leader in the anti-Apartheid movement in sports, against whom South African goernment begins a smear camapaign.

When an Australian rugby player describes seeing the worst of Apartheid in action -- the murder of blacks just outside the stadium in which he and his teammates are playing -- the movie reaches a particular crescendo and a moment of choice. His team leaves South Africa and his country then begins its own anti-Apartheid movement.   It's fascinating to see and hear how the Aussie union members refused to serve or work for any  company that dealt with the South African Springbok rugby team: This meant airlines, trains, hotels, and much more.  Interestingly enough, this also led to Australians taking a closer look at their own history in dealing with their native Aborigines.

This section reaches its most thrilling (and, sadly, disappointing) moments in its look at New Zealand's rugby team and its actions regarding the Springboks. The ironies fly furiously here -- what with native New Zealand Maoris being some of the the country's best players, yet when their team goes to South Africa, because of their "color," they are not allowed to travel with their team or play. Later, when the Sprinboks come to New Zealand, there is huge division among the Maoris themselves over whether to play or to boycott.  As in the U.S. in recent years, when families and friends closed each other out over the lies and actions of the Bush regime, it seems that, for the first time in New Zealand history, this same thing happened regarding the anti-Apartheid movement and its relationship to sports.  The group of protesters we see huddled together in the middle of a rugby field actually stopping a game from being played is rather amazing, given the thousands of screaming fans in the stadium.  Likewise the 29 countries that suddenly leave the Olympic games at the last minute, due to South Africa being allowed to participate.  These small victories, though they add up, still cannot halt Apartheid at this point in time.

For that, we will have to return for episodes five, six and seven.

Have You Heard From Johannesburg opens in New York City on Wednesday, April 14 at Film Forum for a two-week run.  The documentary's distributor, Clarity Films, tells me that London is this documentary's next venue, in May 2010; Vancouver and San Francisco Bay Area in June; and coming up later (with the dates not yet set) will be Washington DC and... South Africa!  If you can't see all of it (or even part of it) during its various theatrical runs, I can't imagine that some enterprising video distributor (Icarus Films, are you listening?) won't pick it up eventually for DVD release.   I'll have more to say once I've watched the final three segments during the coming week.


Note: While all the photos shown here are in black-and-white, much of this documentary is also in color. Photo captions and credits are shown below, from bottom to top:

Peter Hain, the British activist, National Chairman of the young Liberals, and spokesman for the Action Committee Against Racialism on June 22, 1971. Copyright Topham / PA / The Image Works.

Conny Braam at a demonstration against the Soweto massacre, 1977. Copyright Conny Braam.