"Down" with love: GIRLFRIEND, from Justin Lerner, opens at New York's Quad Cinema 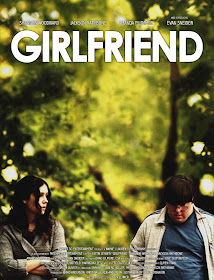 At the beginning of Justin Lerner's new film, GIRLFRIEND, a hard-working mother nearing senior status and her Down Syndrome-afflicted son look up at the stars one night after a long, difficult day. "What would you wish for?" asks mom. "A love affair," he answers. Ooooh, trouble. Because mom is played by that great actress Amanda Plummer, this gives the first few scenes of Lerner's movie enormous weight and veracity. The time is now and the place a rural northeastern community as down on its economic luck as most of of the rest of the U.S., and we enter these sad, deprived lives understanding well what they are currently enduring. 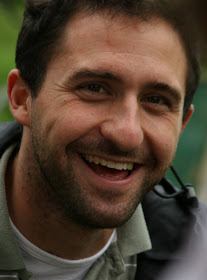 Back in 2007 Mr. Lerner, shown at left, gave us a very well-received, award-winning short film (his fourth), The Replacement Child. Girlfriend is his first full-length feature, and with it he takes us into the mental and physical world of a handicapped young man named Evan (played by an actor with Down Syndrome named Evan Sneider, below), showing us how this character perceives the world, including everything from simple conversation to handling the workplace, friendships and then -- ah, yes -- a love relationship.

If only Mr. Lerner's movie had stuck a little closer to the details of Evan's life, particularly his relationship with his mom. Unfortunately Ms Plummer's character lasts only through the first very few scenes, and when she goes, the movie -- and we -- miss her terribly.

From there on, we're into Evan's relationship with his high school "crush," a very attractive young woman named Candy (played as well as the script permits, by Shannon Woodward, above) and her no-account boyfriend, Russ (essayed with quicksilver mood changes by Jackson Rathbone, below). 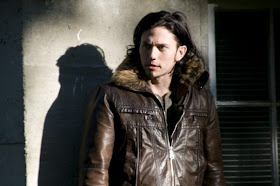 These two have a lot of baggage and back story, and all of it is aired to distraction in the course of this 94-minute movie. Not that their story is uninteresting, exactly, but it does get heavily melodramatic and certainly takes away from what we'd like to find out about Evan himself. Oh, he's quite involved with Candy and Russ -- but at the expense of his own story -- whatever else, besides the crush he has on Candy, that there might be of it. And so the movie moves from character study to melodramatic soap opera to would-be thriller and mystery to finally a feel-good forgiveness tale -- with a little something extra for Evan.

The idea that a Down Syndrome young man might feel sexual and romantic urges is in no way out-of-line. In fact, last year we had a very good example of this in the much better Spanish movie, Me too (Yo, también), which detailed the relationship of a Down Syndome fellow with a woman who works with him. That film did not shy away from the romantic or sexual aspect of the relationship, and consequently brought us viewers up short in a way that was salutary and bracing.

Girlfriend appears not to shy away from this either, but then completely caves in when it should be strongest. In what is so far the least successful movie I have seen all year -- The Abduction of Zack Butterfield, a probable camp classic -- the camera chastely turns away away during the "sex" scene, though we get Swan Lake on the sound track. Here, the camera does the same (thankfully without that particular music) when it might be nice, not to mention germane, to see the faces of our "lovers" at this particular and very fraught time. But, no, Mr Lerner cops out. That's his choice, so let's allow him that. But did he have to do it in the most tried and tired manner possible?

The movie, from Elephant Eye Films and Wayne/Lauren Film Company, opens this Friday, July 15, in New York at the Quad Cinema. It will be playing some festivals and other venues in the near future, so click here (then scroll down) to see the current list of playdates.
TrustMovies at 11:11 PM
Share