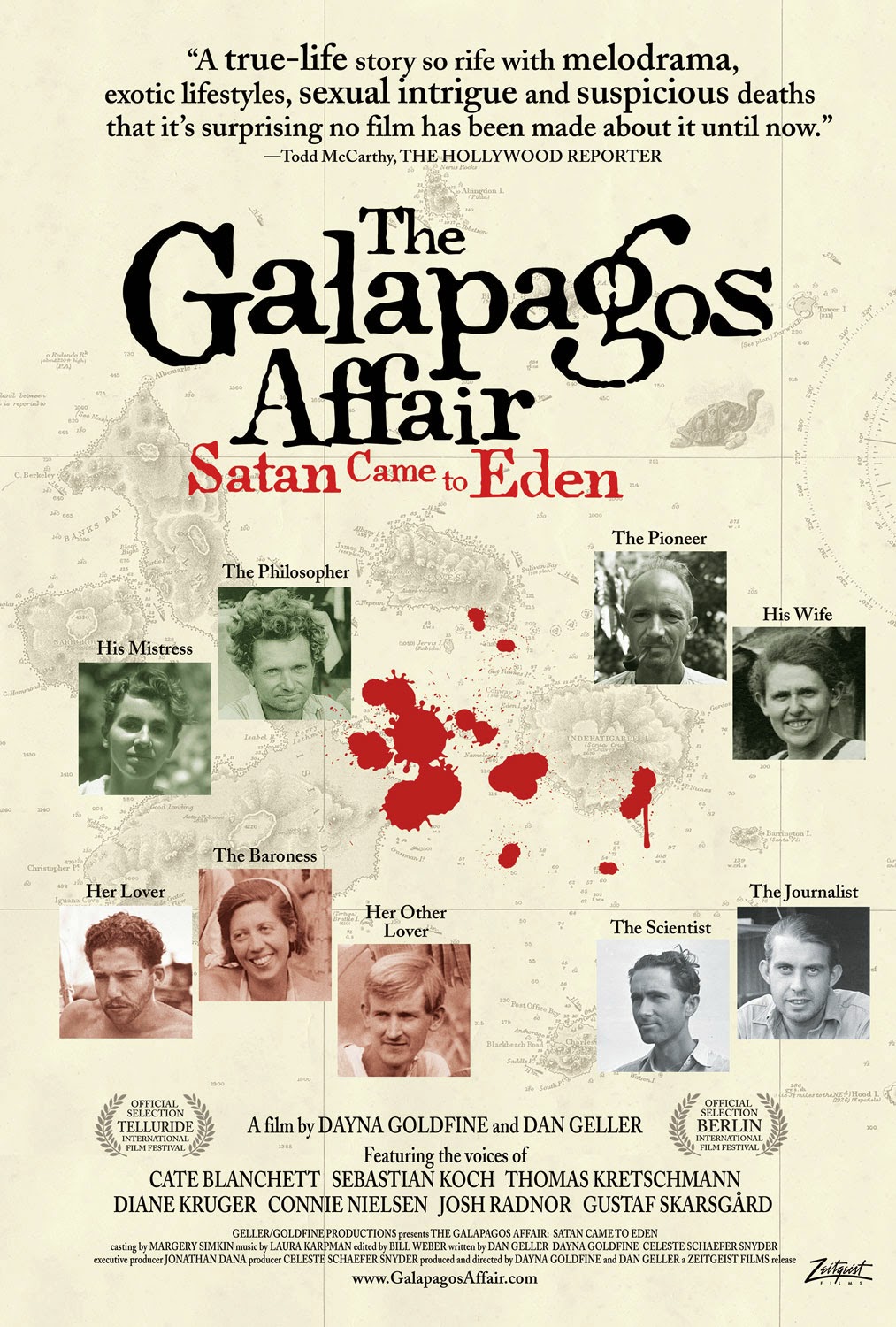 When many of us think about The Galapagos Islands (off the coast of Ecuador), the first thing that may come to mind is the seamy/ sleazy use of those islands in the Tennessee Williams play (and movie based on that play), Suddenly Last Summer. We think of those famous turtles, and then perhaps of Williams' character of Sebastian, much talked of but never actually seen, and his gaudy demise. One of those Galapagos turtles is viewed to enormous effect in the new documentary THE GALAPAGOS AFFAIR: SATAN CAME TO EDEN, and its huge size and large, expressive face are among the strangest and most beautiful things in this very strange film. Local lore has it that these turtles can size up a newcomer to the island immediately, knowing if s/he is bound for a good or a bad end. 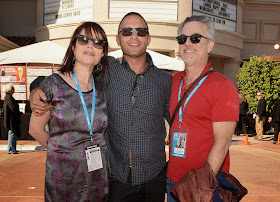 By the time you've seen that turtle's face again and come to the conclusion of this eye-opening, mind-expanding, two-hour documentary -- written, produced and directed by the team of Dayna Goldfine and Daniel Geller (shown above, flanking actor Thomas Kretschmann, who voiced one of the characters here), you can only imagine what the old, heavy-shelled fellow determined about the folk you've just met -- most of whom are German and several of whom have come to very bad ends. (You may also, if you're anything like me, be wondering what it was about post-WWI/pre-WWII Germany that made for such delicious, often nasty decadence and stupidity. Christopher Isherwood was certainly onto something in his Berlin Stories!) 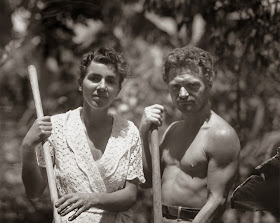 We know from the start that bad things happened -- but to whom, how and why become the mystery of the film. The filmmakers, however, are interested in much more than mere mystery. The Galapagos Affair tackles the very idea of '"island paradises" and probes the kind of character traits and human beings who would elect to struggle so far afield from the way most of humanity lives. The original German emigres to the Galapagos were Dore Strauch and Friedrich Ritter (shown above, with Ritter on the right), lovers who had left their respective mates to come and live as "pioneers," even though Strauch had been recently diagnosed with Multiple schlerosis. Almost immediately these two are in trouble. 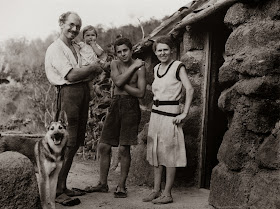 Joining this odd pair on Floreana (one of the smaller islands), though uninvited, comes the family Wittmer -- father, pregnant mother and their son (shown above soon after their daughter was born on the island) -- expecting evidently (because they, too, are German) to be welcomed with open arms. 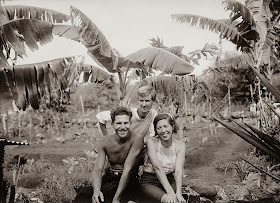 And then comes the pièce de résistance, a would-be "Baroness" (above, right) and her two lovers, with big plans to build a hotel resort on the island, who arrive and immediately, by sheer force of "entitlement," try to take over the island. 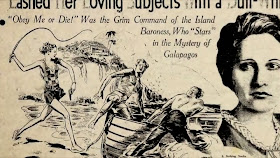 As word of these strange people reaches civilization, newspaper and magazine articles (above and below) appear, ships occasionally dock and scientists and others arrive to see how the oddities are faring. Jealousies and tensions mount, a severe drought occurs and finally...  well, you really had to be there. 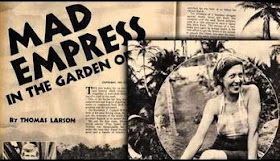 Thanks to Ms Goldfine and Mr. Geller, who earlier gave us the terrific documentary Ballet Russes, we are there. The filmmakers have elected to tell their story the old-fashioned way -- no "dramatic re-enactments" here -- using some wonderful archival footage, along with the many letters and other writings of several of the participants (given voice by some very high-end actors: Cate Blanchett, Diane Kruger, Sebastian Koch, Connie Nielsen, Gustaf Skarsgård, Josh Radnor and Herr Kretschmann).

There are also interviews with a host of talking heads (I counted 16 such) who are descendants of the original characters or have simply lived in the Galapagos for decades. People like Carmen Kubler Angermeyer (right) and Jose Machuca (below) provide lots of information and ideas about not only what happened to this bizarre crew but why certain folk choose

this kind of lifestyle. Together with the archival footage and information, and the many interviews with Galapagos residents, we begin to build up a real knowledge of what island life must be like. Finally, when a woman named Friedel Horneman (below) tells us of her early life, arranged marriage and her means of

escaping same, although none of this figures into the main story thread, it suddenly stands on its own as a kind of perfect example of "Galapagosiana" and how island life can make one do the oddest things. Along the way, we're also treated to actual footage from a "pirate movie" filmed by, I believe, one of those ship's captains, and starring the Baroness (overacting to beat the band) and her motley crew. 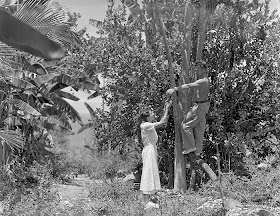 By the finale, the movie has turned into a Rashomon-like experience calling for the old Pontius Pilate question, What is truth? Considering all the little liars on view here, my final response was a huge sigh and the thought that "Wow-- this absolutely could not have happened to a nicer bunch of people!" As one of the talking heads tells us at the close, "Paradise is not a place. It's a philosophy." If so, it's one that is nowhere to be found in the lives of these 1930s nitwits. 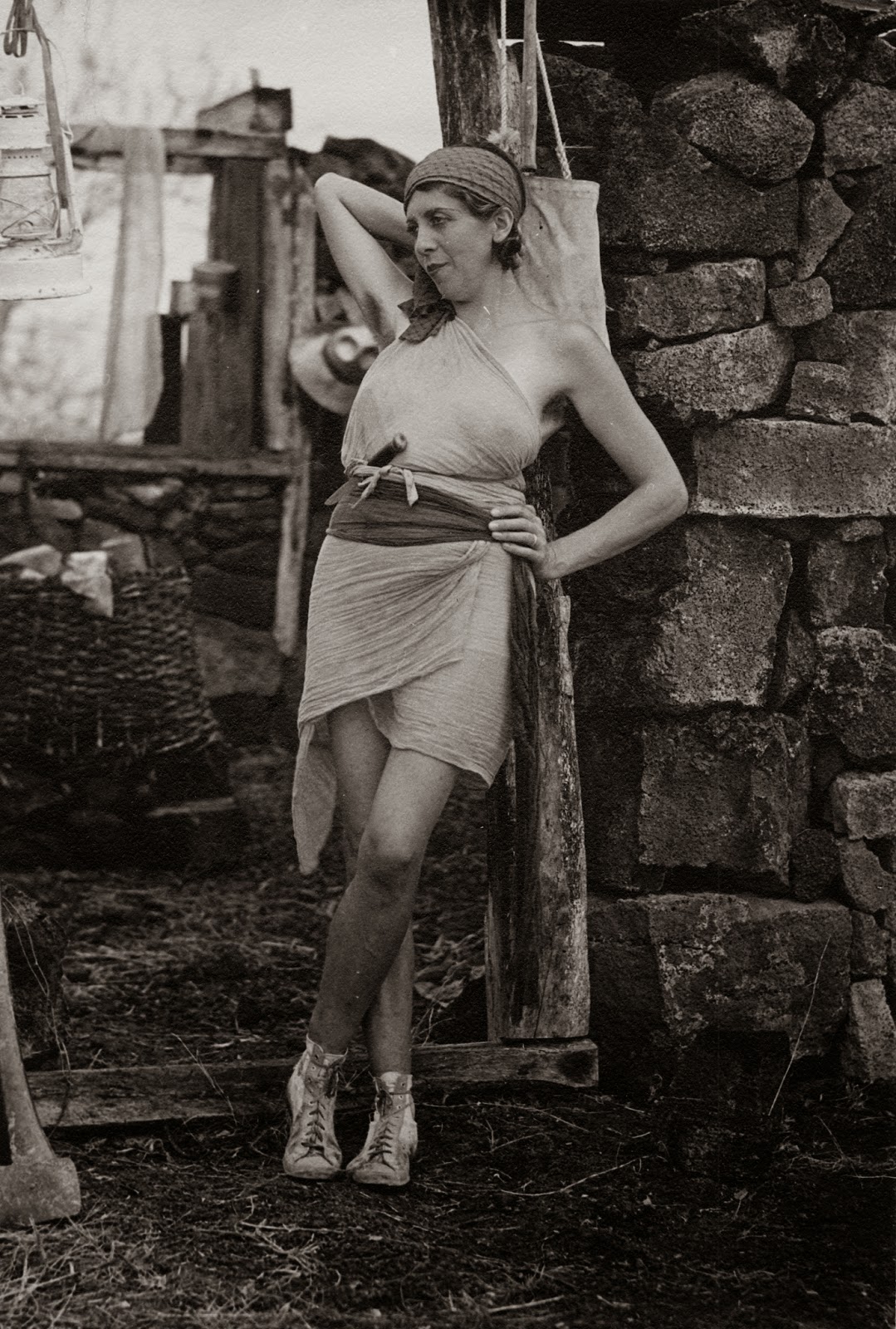 The Galapagos Affair: Satan Came to Eden, from Zeitgeist Films, opens this Friday, April 4, in New York City at the Lincoln Plaza Cinema, on April 11 in San Francisco at the Embarcadero Center Cinema, and in Los Angeles at Laemmle's Royal on April 18.

After (and sometimes during) these weeks, the film will slowly expand across the country. To see all currently scheduled playdates, with cities and theaters, simply click here and then use the sidebar at right to scroll down....

The graphics above are from the film
itself, except for the photo of the filmmakers,
which is by Jason Kempin and comes
courtesy of Getty Images.