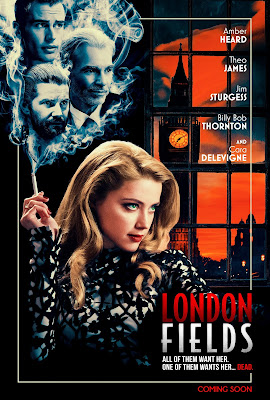 At this point in her career, the very beautiful actress Amber Heard is probably best known for her seven-year, off-and-on relationship with the notorious Johnny Depp, as well as for playing gorgeous femme fatales, and for getting involved with movies that end up in lawsuit-land, sometimes remaining in limbo for years -- as did All the Boys Love Mandy Lane and now the finally-released-theatrically-after-three-years-on-the-shelf, LONDON FIELDS.

The film-- it premiered a few years back at the Toronto film festival -- was not well-received, resulting in a nasty disagreement between director (Matthew Cullen) and producer (Chris Hanley). TrustMovies is not quite sure of what that result actually is. He also does not know if the streaming link for the film he recently viewed (which was nearly one quarter-hour shorter than the running time listed for the film on the IMDB, the soundtrack of which was not quite in sync with the lip-movements for about half of the film) was the Toronto cut or something quite else. 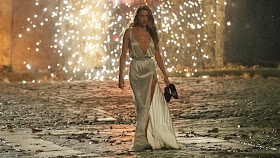 Not having read the original novel by Martin Amis, I can't compare the film to it. On its own merits (or demerits), this version seems to have a very "writerly" screenplay/dialog (by Roberta Hanley, the producer's wife, courtesy, I am guessing, of Mr. Amis), some of which is rather fun. It is classily photographed (Guillermo Navarro), and its plot -- about a beautiful young woman juggling at least three different lovers who is said to be clairvoyant and thus foresees her own death -- is certainly serviceable.

Yet the result, as seen here, is too heavy-handed by half, and even unnecessarily repetitive. In the leading role, the gorgeous Ms Heard is an eyeful and fun to view, whether in her "demise" dress (two photos above) or her skivvies (just above) or playing a bespectacled caseworker (below). She makes a believable femme fatale in all her several forms.

As the satellite fellows who circle round her, Billy Bob Thornton (below, left) proves the most interesting, playing the writer who intends to use her story as entryway to a best-selling novel. 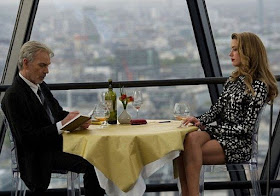 Jim Sturgess (below, right) and Theo James (below, left) complete the trio. Mr. Sturgess, who more often plays sensitive types, here appears in uber-crass mode, and unfortunately the screenplay does not allow him to be be anything more. Mr. James is, as usual, handsome, hot and hunky, even if his character is also a bit too one-note. (The character does have a very amusing, if scary, young son.) 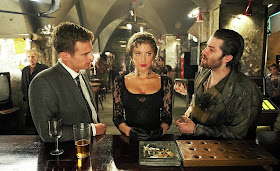 The ubiquitous Mr. Depp (below) makes what I am told is an uncredited appearance in what is a quite large supporting role, while Jason Issacs appears briefly as a famous writer, the London flat of whom Billy Bob has traded for his own Hell's Kitchen apartment. (Do stay around for the final sequence in which we note, via a comic literary television interview, the lengths to which a writer will go to achieve a new success.) There is some satire here, and some of it is fairly funny, though I feel certain that the novel, as is usually the case, is a good deal better.

All told, the film is pretty (sometime very), campy (probably unintentionally) and rather dumb fun. Whoever gets the credit for what we see here, I have experienced a lot worse times at the movies and, I wager, so will you.

From GVN Releasing and running 105 minutes, London Fields opens theatrically nationwide this Friday. October 26. In New York City it plays the AMC Empire 25, and in the Los Angeles area it opens all over the place, including Laemmles' Monica Film Center and the Cinemark 18 & HD in L.A. proper. Here in South Florida look for it at AMC's Aventura 24, Sunset Place 24, Indian River 24 and CityPlace 20, and at the Cinepolis Grove 14.  To see all currently playdates, cities and theaters around the country, click here.
TrustMovies at 10:05 PM
Share