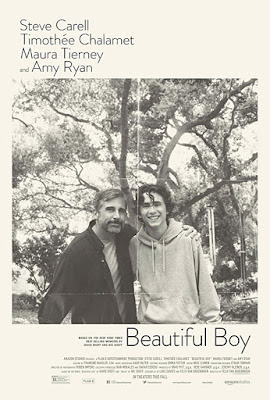 During the end credits for BEAUTIFUL BOY -- the new film from Felix Van Groeningen (who earlier gave us the much better and Oscar-nominated Broken Circle Breakdown) -- we are treated to some information and statistics about the horrendous addiction crisis going on today.

For some, this may serve to underscore the film's importance. For TrustMovies, this mostly seemed like old news -- as did the overlong and tiresome movie that preceded it. This end-title sequence also dropped some information about one of the film's two main characters that seems, given what we've just witnessed, at best surprising and at worst maybe a tad unbelievable. 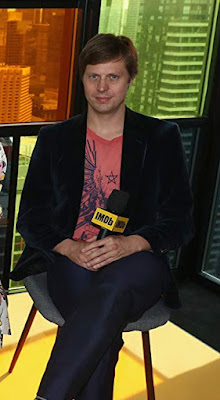 The Flemish filmmaker, shown at left, who directed the movie, as well as co-wrote it (with Luke Davies, based on the memoirs of the father, David Sheff, and son, Nic Sheff, depicted in the film), draws the expected good performances from stars Steve Carell (dad) and Timothée Chalamet (son), as well as from the entire supporting cast.

The problem lies in the screenplay itself and the many incidents it chooses to offer us. Almost all of these are dour, if not downright negative, as though this poor family has had nothing but depression and mild-to-major trauma to contend with for most of its lifetime. Surely there must have been a few "good times" now and then? If so, you'd never suspect it here. Yes, the filmmaker tosses in a few very brief flashbacks, but they register as little more than standard cliché. After awhile, you begin to wonder why you would choose to spend much time with these dreary folk. That question never goes away for the nearly two-hour running time. 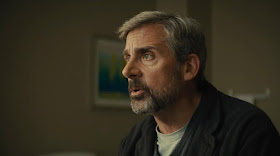 Dad (Carell, above) is a highly-regarded freelance journalist (we observe his credits in everything from The New York Times to Rolling Stone), who is clearly too controlling and pushy, though otherwise a pretty decent guy. Carell lets us see him, flaws and all. Son (Chalamet, below) comes through as pleasant, pretty, and a bit unsure of himself -- the last of which is only compounded by Dad's behavior. 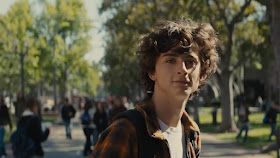 The absent mom is played by the fine Amy Ryan (below), while the more easy-going and caring stepmom is essayed by the also fine Maura Tierney, with a drug-addled sort-of girlfriend brought to life/death by Kaitlyn Dever. The plot, such as it is, goes from on drugs to off them, on and off and on until the movie simply ends. While this is believable, of course, it is also tiring. And something we've seen time and again -- in movies (from The Man With the Golden Arm onward) and very likely at this point in reality. 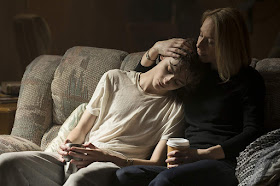 Nic's degradation (below) seems real enough, as does dad David's reactions to it (occasionally the dialog does sound a bit too much like, "This is an important lesson. Are you listening?"). Otherwise, it's all OK. But little more. One's reaction to a tale like this really ought to be something other than Been there, done that. 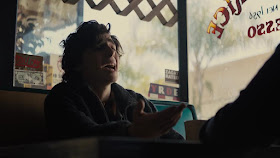 From Amazon Studios, the movie -- after opening on both coasts a week or two back -- hits South Florida one week earlier than originally scheduled: today, Friday, October 26. Look for it at the AMC Aventura 24, Regal's South Beach 18 the Cinepolis Grove 15, The Landmark at Merrick Park 7, the Cinemark Palace 20, and Regal's Shadowood 16. Wherever you live around the country, click here (and then click on Get Tickets on the task bar atop the screen) to find the theaters nearest you.
TrustMovies at 12:12 AM
Share