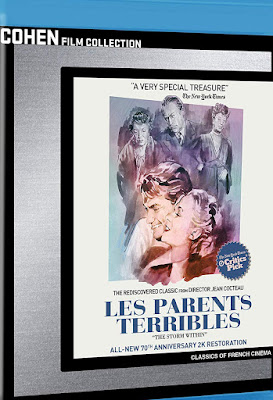 First released in 1948, LES PARENTS TERRIBLES (aka The Storm Within) celebrates its 70th anniversary this year. This is -- here in the USA, at least -- a lesser-known film by French icon Jean Cocteau, and the reasons for this will become readily apparent upon viewing.

In the course of his 74-year life, Cocteau achieved great success as a poet, writer, designer, playwright, fine artist and filmmaker (Beauty and the Beast, Orpheus and Blood of a Poet among others), and Les Parents Terribles was adapted by Cocteau from his own very successful play of the same name. But instead of "opening out" the tale in its transition to film (as so many plays-become-movies insist upon doing), the author kept its theatrical roots stage-bound and ever apparent. 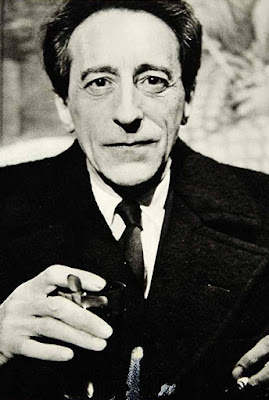 In fact, Cocteau, shown at left, makes witty good fun of his film's theatricality in a manner that is both sophisticated and charming. His dialog and mise en scène may bring to mind both Sacha Guitry and Oscar Wilde.

The plot involves a French bourgeois family in which narcissism, hypocrisy, sacrifice and basic human need gone awry keep coming into amusing conflict, as the family's overgrown child/man son begins to spread his wings, causing his mom, dad and aunt to have to re-jigger their own. 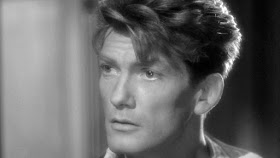 In the pivotal role of that son, appears Cocteau's favorite actor and long-time lover, Jean Marais (above), very probably France's most beautiful male actor until Alain Delon hit the screen. M. Marais was a well-seasoned 35 at the time of the shooting, so playing a naive 22-year-old is a bit of a stretch. It shows. (The actor overdoes the naivete and youthful enthusiasm.) Yet Marais is so gorgeous of face and body that many viewers won't mind in the least. 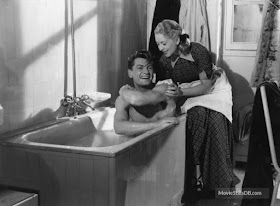 His new love is played by a popular actress of the time, Josette Day (above), and she is indeed lovely. But the performers who really grease the wheels here are that older generation: mother (played by Yvonne de Bray, below, right), 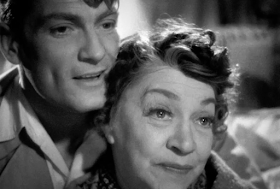 father (Marcel André, below, left), and especially Aunt Léo, given a lip-smackingly great performance by Gabrielle Dorziat, shown below, center. It is Léo, finally, who becomes the real pivotal character here, as well as the one we root for most, as it is she who has given up the most.

Most interesting of all may be how little Cocteau uses his usual and plenteous bag of film tricks. Instead he simply gives us a plethora of smart dialog, offered up by his trio of veteran performers. It is more than enough. 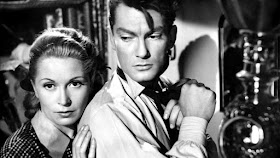 An oddball cross between a boulevard comedy and a knife to the heart of conventional morality (even -- nay, especially -- that of the sophisticated French variety), Les Parents Terribles deserves its "classic" status, though it may take some time and effort for the film to again reach those heights, audience-wise. 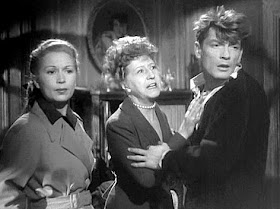 Among the new Blu-ray/DVD's bonus features is a lovely five-minute introduction by Columbia University professor and ex-FSLC stalwart, Richard Peña, plus a nice interview with assistant director Claude Pinoteau, a few "camera tests," and the film's trailers -- the original and that of the recent theatrical re-release. 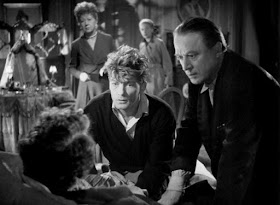 From the Cohen Film Collection, the new Blu-ray and DVD of Les Parents Terribles hit the street this coming Tuesday, October 30 -- for purchase and (I hope) rental. The film will also simultaneously be available for digital streaming.
TrustMovies at 1:55 PM
Share