The Flori-duh movie screening strikes again -- this time to Marielle Heller's quietly delightful CAN YOU EVER FORGIVE ME? 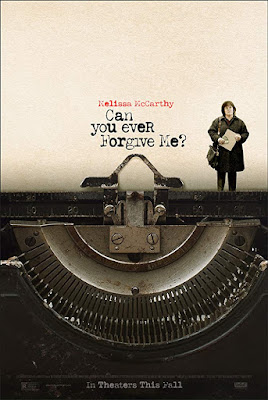 TrustMovies dearly hopes that, elsewhere around the country, movie theaters are doing a better job of screening their films than happens down here in South Florida with alarming frequency. I would estimate that every four to five times that I go out to a theater, something untoward occurs that must be remedied before the screening can continue. And this happens as often at critics' screenings as it does when I simply pay to attend a film like most other audiences. Either the film is out of focus, or we get visuals and no sound (or sound without visuals) or, as last night, about two-thirds or three-quarters of the way through CAN YOU EVER FORGIVE ME?, the movie simply stopped dead in its tracks, due to some problems with its "projection". After a few minutes, it started up again, only to stop a second and (soon after that) a third time -- after which it never finished at all (from what I'm told, at least; my spouse and I beat a retreat after waiting nearly an extra half hour to no result). 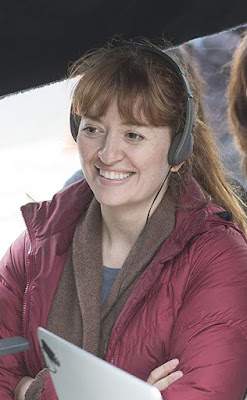 Hint to theater owners: If you are worried about further losing your ever decreasing audiences, this is not the way to remedy that.

As written by Nicole Holofcener (Enough Said) and Jeff Whitty (Shortbus) and directed by Marielle Heller (The Diary of a Teenage Girl), shown at right, Can You ever Forgive Me? moves along at just about a perfect pace, as it tells the based-on-life tale of an ex-successful writer, Lee Israel, and how she became an even-better-known "literary forger."

While TrustMovies does not normally cover a film he hasn't finished viewing, since he does not know at this point if and when he'll get the opportunity to finish this one, and because that first and major portion has saw was so very good, it is hard for him to imagine the rest of the film will not follow suit. 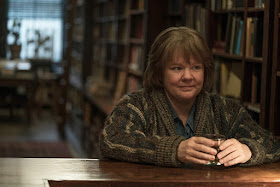 Also, if you're a fan of actress Melissa McCarthy (above and below, and there are a lot of these), know that this may be her very best performance ever. She makes Ms Israel a bitch who -- thanks to the abilities of the actress and the filmmakers to instill such humanity into the woman -- wins us over completely.

Ditto Richard E. Grant (below, right), who plays her best (and nearly only) friend, confidant and eventual henchman, an aging gay con-man who is forever down on his luck. 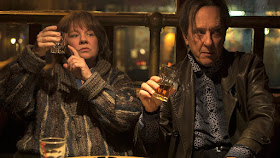 Heller, Holofcener and Whitty do such a remarkable job of both storytelling and character-building that their tale seems to practically tell itself, balancing comedy and drama, with nary a seam ever showing. We so grow to understand the kind of self-imposed prison that Israel's life has become that it is difficult not to root for her, despite her deception. 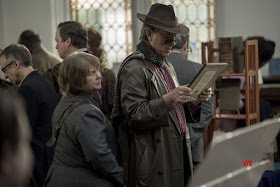 Because the movie is so "literary" and 20th-Century-based, some knowledge of the likes of Noel Coward, Dorothy Parker, Marlene Dietrich, Fanny Brice and others will certainly increase one's enjoyment. Action lovers had best remain at home. I could certainly watch the whole thing again, simply to savor the wonderful performances -- Dolly Wells' (below, left) among these -- and the witty, dry dialog. 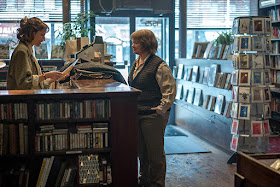 When you see the film, I hope you have better luck at the theater than did we. From Fox Searchlight and running 106 minutes -- 20 or so of which  I still hope to see -- the movie opened on the coasts two weeks ago, and has expanded nationwide with each new week. Here in South Florida it opens this Friday, November 2, in the Miami, Fort Lauderdale, Boca Raton and West Palm Beach areas.
TrustMovies at 4:26 PM
Share