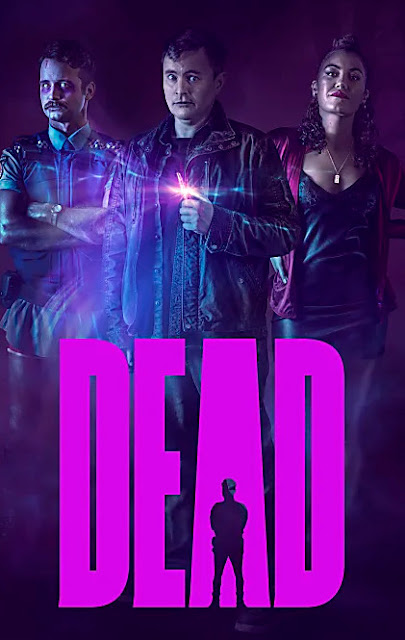 Other than Canada, TrustMovies would say it's New Zealand whose films overall have a distinct enough feel and attitude that they can, whatever genre in which they might appear, be pretty quickly identified as to their home country. (Of course, with New Zealand the accent certainly helps.)  DEAD -- a most aptly titled otherworldly rom-com, murder, mayhem and mama movie -- proves another such film, one that builds slowly but significantly toward its low-key giggles, slight-but-effective scares, and a number of very nice surprises along the way. I  do not want to oversell this little oddball, but if you stick with it, the rewards are plenteous and lovely. 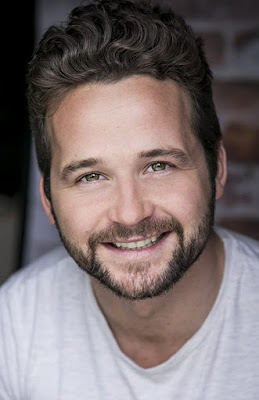 From the outset as one of our heroes (the dead one, a former cop) comes back as a ghost -- dressed only in a vest, shirt and skivvies -- this bizarre and quirky gem gathers steam and smarts. Our other hero (the live one), a pothead who likes to indulge, has the ability to see ghosts and then try to unite them with their loved ones, thanks to a combination of a certain medicine and other drugs to which he's partial. (Yes, you either suspend your disbelief and accept this or move along to your next movie.)
As co-written and directed by Hayden J. Weal (shown above and at left below), who also plays the dead hero, and co-written by Thomas Sainsbury (below, right), who plays the live one, their movie is in one sense similar to a whole lot of others you've seen, while in another sense proving to be utterly original via its own witty style, charm and, yes,  that specific New Zealand "attitude."

This is a kind of buddy/bromance in which our live hero also begins to bond with the dead's one's very living sister (the gorgeous and funny Tomai Ihaia, below, right), even as he is trying to work out his problems with others (his drug dealer, his mother, and his various bereaved clients).

In addition to our dead cop, a number of other ghosts populate the film and are often nearly as funny as the living characters. On top of all this, the movie deals with another important subject/theme which I am going to refrain from even naming because the way in which Dead handles this one is exemplary: subtle, witty and with increasing humor that reaches its delightful zenith during the end credits, set in a heaven where one's genitalia is covered in, well, the most adorable manner.

This movie is simultaneously dark, dirty, endearing and often off-the-wall hilarious. It also takes its oddball place amongst memorable "mother" movies, for reasons I will also not go into here. Dear reader, you deserve all the goofy surprises in store. (That's Jennifer Ward-Leland, below, as our live hero's mater dearest.)

I was so thoroughly enjoying this film that I forgot to take any notes. So this review may be shorter than usual.  But I would not be surprised to find Dead ending up on my best-of-year list -- not because it is anything approaching great but simply due to its being such an original: an eccentric, satisfying little bit of the unexpected.

From 1091 Pictures and running 91 minutes, Dead hits certain theaters and virtual cinema today, Friday, September 25, and will reach home video -- for purchase or rental -- on October 6.
TrustMovies at 12:12 PM
Share