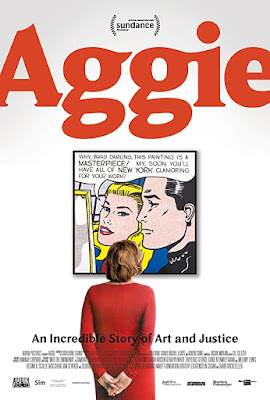 Having kept myself a deliberate outsider to both the appreciation of and the world of contemporary art, TrustMovies has heard the name Agnes Gund mentioned over the years but had not paid much attention to it. That has changed with the release of the new documentary, AGGIE, directed by Gund's daughter Catherine Gund and starring -- if  rather reluctantly -- her mother. More important, the film co-stars her mom's contributions to not merely contemporary art (she's a wealthy collector of the stuff) but to the constant and necessary struggle for justice in this ever-fraught world of ours. Aggie, it turns out, puts her money -- and much else that's important, too -- where her mouth is. 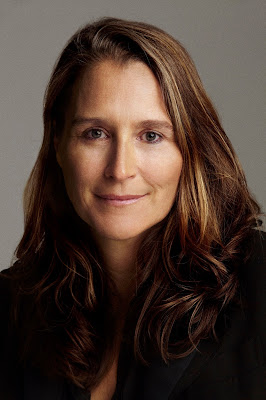 Filmmaker Gund, shown at right and at bottom with mom, lets us know from the get-go that Aggie is not particularly happy to have this film made.
Agnes Gund is clearly quite a private person (we don't learn much at all here about her personal life), and so the documentary concentrates on the art she loves and finds important, and how this impacts and interacts with the need for justice. (The film begins with quote on the subject from another filmmaker Aggie has championed, Ava DuVernay, below.) 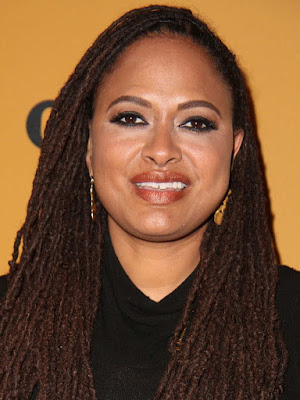 Early on in the film, we see one of  those famous comic-book inspired works by Roy Lichtenstein (below) and learn that it was somehow important in ways others than merely being an expensive piece of art. Later we learn exactly how all this happened and why.
The junior Ms Gund mixes her mom's family history with the various artists and their art that has been important to her down the decades (the elder Gunn is now in her 80s), and with the struggle for justice she fought for on so many different fronts. 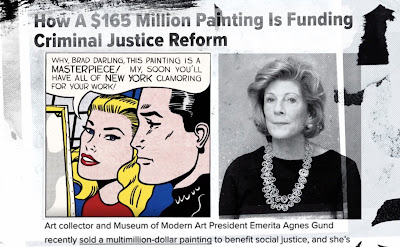 These fronts include everything from the fight for LGBT rights and feminism (that's artist Xaviera Simmons, below, left), to prison reform and most interestingly, for the full rights of people of color here in the USA. Aggie had a conversation years back in which she asked how and why the German people could claim not to have known about the Nazi atrocities during World War II. "Were you alive back in the 1950s?" her companion asks. When her answer is Yes, of course, he asks her how she and all the other Americans did not seem to know or care about the lynchings, murders and general abuse of Negros in here in the USA. 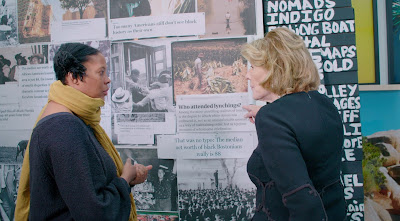 Yes, The elder Gund is one of those "white innocents" -- just like me and so many others I know -- who managed to not really see and understand what was going on in our own country at that time. Gund does not excuse herself. But her life seems to have been dedicated to helping right many of the wrongs she did not or could not fully grasp as a younger person brought up in a society and culture that implicitly consented to all of this as, if not "right," still somehow acceptable. 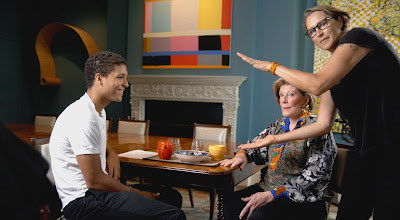 We meet glancingly so many of the artists she has helped and championed over the years -- from the famous to simply some school-kids she's encouraged via the in-school art programs she has funded. Even John Waters is here. (Gund went to bat for MoMA's acquisition of his bad-taste masterpiece, Pink Flamingos.) By the time we see her work during the AIDS crisis right up and through our current times of Black Lives Matter and the need for prison reform, I suspect you will agree with me that this movie is one of the few recent documentaries you can call genuinely inspiring.  (That's Gund's grandson, Rio Hope Gund, above, left.) 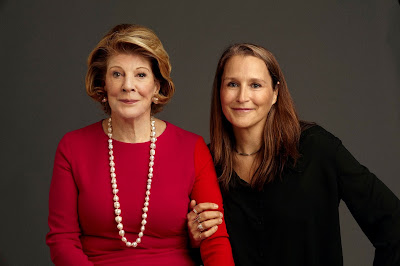 From Strand Releasing and running just 91 minutes, Aggie opens at New York City's Film Forum virtual cinema tomorrow, Wednesday, October 7. Click here for more information on how to view. Will the documentary screen elsewhere? Click here and then scroll down to click on SCREENINGS in the task bar for the latest update.
TrustMovies at 2:22 PM
Share