A Russian emigrant diddles around in France: Claude Chamis' THE WANDERINGS OF IVAN 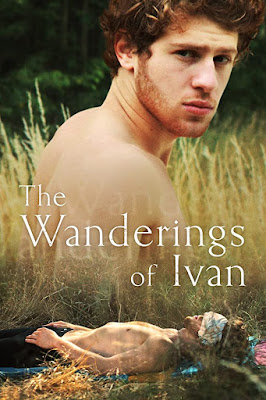 That sometimes fine line between art and pomposity gets a real workout in the latest offering from NQV, the 2018 film from French filmmaker Claude Chamis entitled THE WANDERINGS OF IVAN.
Tracking a recent young emigrant from Russia as he wanders around a French city and then some woodland area nearby, the movie stars a hunky, auburn-haired actor named Aram Arakelyan (at right and below) who's got a great body and a handsome face that unfortunately he keeps pretty much in a single expression throughout the entire movie. Meanwhile, the so-so script graces us with a voiceover in which Ivan talks (and talks and talks) about the friends he left in Russia. Also tossed in is a little bit about how he left them -- but almost no why. 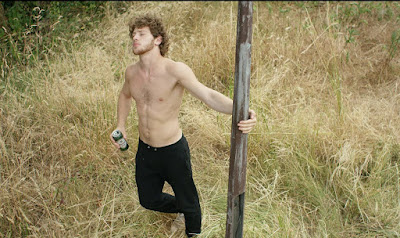 The movie opens with Ivan asleep in the automobile of the surprised young woman who finds him there and screams for him to get out. He then wanders around begging for money, which almost no one gives him. Are we to think that France is full of an uncaring populace? Rather like the rest of the western (and maybe eastern) world, I suppose. 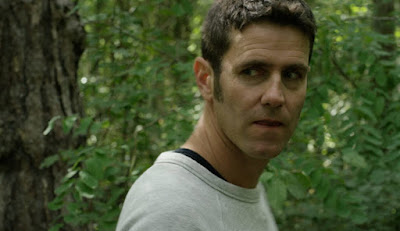 The woods where he wanders turns out to be a major gay cruising spot, but Ivan's having no part of this. Well, he is willing to take the money from a john (Franck Zerbib, above) and then run instead of suck, but what happens here turns out to be a lot worse than merely that. 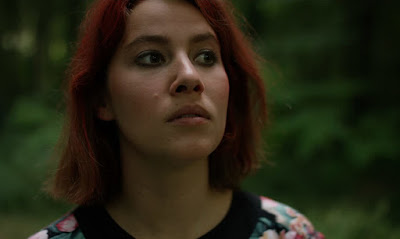 Along the way, he gets to kiss one young woman (Camille Freychet, above) and then fuck an older one (Corine Watrin, below) and barely interact with a few of these woods' male hookers -- to just about no avail (and hardly more interest)  whatsoever. 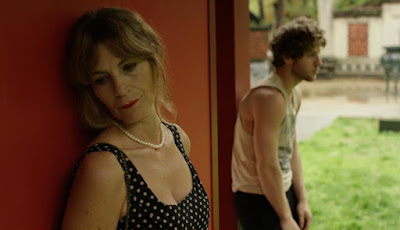 One of those hookers (Benjamin Baclet, foreground, below) gifts another (Pablo Alarson, background, below) with a book of philosophic musings (of course, this is a French film!), quite a lot of the content of which is droned at us via the narration. Uh.... yeah. These musings/life lessons are not dumb exactly, but the movie itself eventually becomes so. And pointless -- unless the point is to point out how difficult it is these days to make any connection with our fellow man. 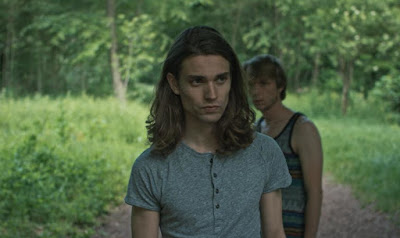 There are no real characters here -- including Ivan himself -- just a bunch of good-looking ciphers. Meanwhile, the cinematography is nice, performances are mostly of the "look away so meaningfully" sort, and the film's finale may leave you with but a single question, "Who gives a shit?" As you can probably tell by now, TrustMovies didn't. 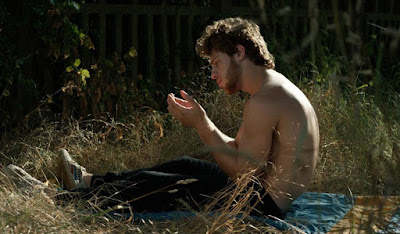 From NQV Media (whose offerings I usually recommend more highly than this one) and running just 75 minutes, The Wanderings of Ivan hit digital streaming last week and is available now. You can view it by clicking here, then scrolling down to the line that begins with WATCH and making the proper choice among several possibilities.
TrustMovies at 12:12 PM
Share