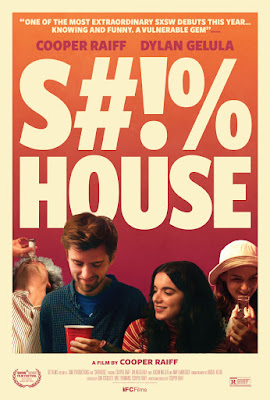 As has been duly noted elsewhere, SHITHOUSE -- the movie named for a college fraternity that hosts particularly popular parties -- deals with the sort of student, a young man named Alex, whom we've not seen as the center of attention in most examples of this genre.
He's male, all right, but he's also very close to unhealthily shy and uncertain. Frightened, really -- about leaving his warm and loving family, as well as encountering and interacting with the rest of the college students. His stupid and somewhat abusive roommate clearly thinks Alex is a needless nerd and, other than because we audiences usually root for the underdog, we come pretty close to agreeing with that assessment. 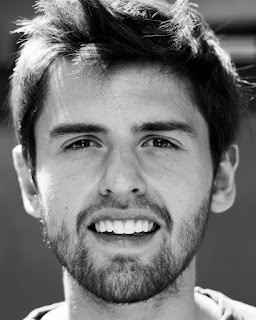 As written, directed, co-edited by and also starring Cooper Raiff (at left) in the lead role, Shithouse, were it not as good a film as it is, would probably be pegged as a vanity production. It's still smacks somewhat of the vain, but it's worth seeing, and Mr Raiff at least has qualities that might indeed produce some degree of vanity.
He's handsome, intelligent and possesses a view of humanity -- concerning the circumscribed world of family and college shown here -- that proves to be encompassing enough yet less typical and judgmental than first glance might indicate. And in his two leading characters, Alex and Maggie, the odd girl he meets with whom he becomes quickly entangled, he's given us two people worth knowing. 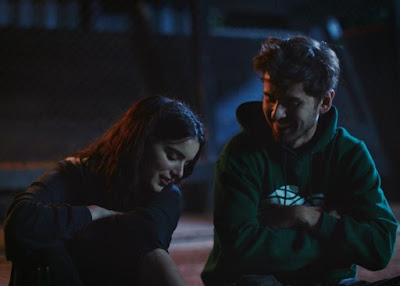 Maggie is played by Dylan Gelula (above, left), an actress who is fine match for Raiff in terms of nicely offsetting his aw-shucks charm and rectitude. She's acerbic, witty, a little nasty and, of course, as it turns out, a lot needy. Yes, Shithouse deals in some of the usual youth cliches, but it is smart enough to disguise them for awhile. 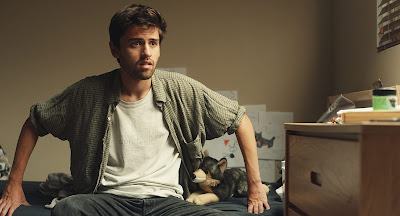 We also get those frat parties, perhaps the single most boring, repetitive and tiring iteration of "youthful fun" movies have yet given us, and that are not, it must be said, any more interesting here than elsewhere. (Animal House has much to atone for.) But as the film slowly centers around this main relationship and how it builds then falters and builds again, its strengths becomes more apparent. 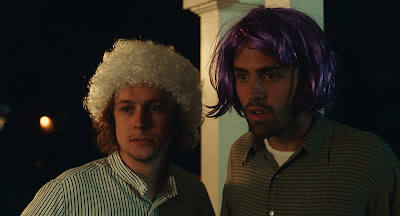 Amy Landecker does a lovely job playing Alex's caring, somewhat hovering mom, while Logan Miller (above, left) has the even more difficult task of turning obnoxious roommate Sam into someone maybe worth caring about -- which he manages quite well. 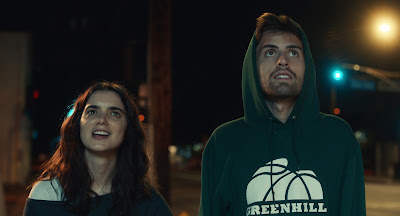 Overall, there's nothing here to set the world aflame, and at 102 minutes, the movie does seem overlong for what it has to say. Yet considering what it does accomplish -- and well -- we'll be eager to view the next step for Mr. Raiff.  From IFC Films, Shithouse opens this Friday, October 16, in theaters and via digital and VOD.
TrustMovies at 12:12 PM
Share