The experience of women via the life of Gloria Steinem forms the heart of Julie Taymor's new film, THE GLORIAS 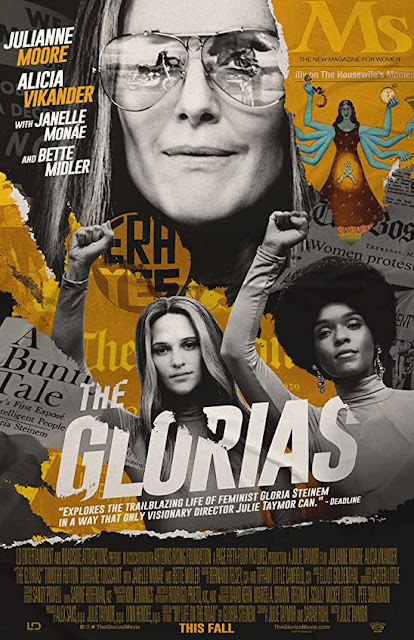 I suspect that, should most of us -- us aged, anyway -- look back on our own lives, we will see not simply one single person at various stages but a number of different characters, each one a part of who we have finally come to be. When I first heard of the idea for THE GLORIAS -- that its leading character, the famous Gloria Steinem, would be protrayed by several different actresses -- I wondered if this would end up more a stunt than an artful portrayal. Given that the director of the film is Julie Taymor (shown below) and its screenwriters Ms Taymor and playwright Sarah Ruhl (adapting from Ms Steinem's own book), I should have expected a lot more. That's certainly what I got. 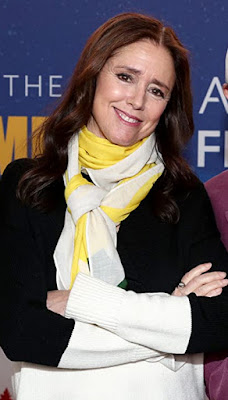 From the film's opening, featuring the simultaneous use of color and black-and-white cinematography (by Rodrigo Prieto), and the quick introduction of these Glorias -- the child (Ryan Keira Armstrong), the almost-teen (Lulu Wilson), the young adult (Alicia Vikander), the fully mature woman (Julianne Moore) and finally Ms Steinem herself -- the filmmaking proves so limpid and graceful that it immediately carries us away.

With very few exceptions (the times when the movie grows a little too preachy), The Glorias continues in that fashion throughout. (Even when it's preachy, that preaching is so on-the-mark and worth hearing that TrustMovies did not mind all that much.) 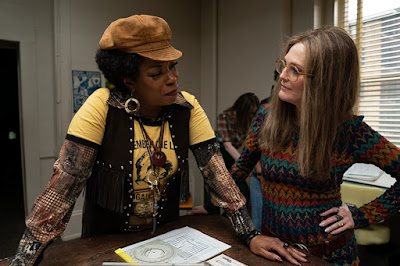 From her early days when Steinem had to travel, a bus was what she could afford, so the movie spends a lot of time on the bus in which all four-aged Glorias bond and chat and question each other about the past. This is smartly woven into the timeline of Gloria's life -- with her family, in school, traveling in India, as a budding journalist and working woman, her founding of Ms Magazine, and finally her career as activist and spokesperson for women's liberation. (That's Ms Moore, above, right, with Lorraine Toussaint as Flo Kennedy.) 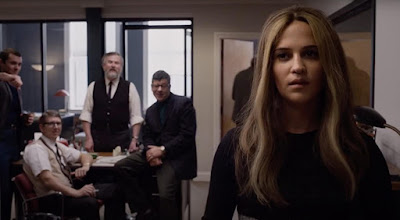 Much of this we heard and seen previously (most recently on Hulu's excellent series about Phyllis Schlafly and friends, Mrs. America) yet here it still has plenty of wit and force. And, yes, as has been pointed out, even at its near-two-and-one-half-hour running time, the movie glides along the surface of this life, albeit with great skill and feeling. (Above is Ms Vikander, bridling at her sex object role at her magazine job.) 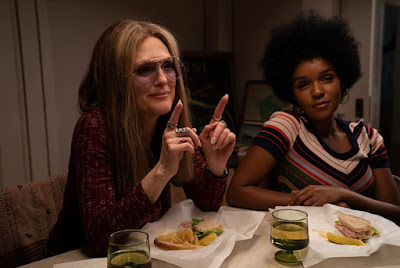 What gives The Glorias its remarkable depth comes from the movie's ability to keep its theme in constant (yet almost never belabored) focus: the place and plight of women worldwide, as seen through the eyes and life of Ms Steinem. The is quietly imbued in every scene by every performance (the film editor is Sabine Hoffman), and the overall effect has a growing power that slowly rises to a marvelous pitch and volume simply by being ever-present. (Above, right, Janelle Monáe as Dorothy Pitman Hughes. 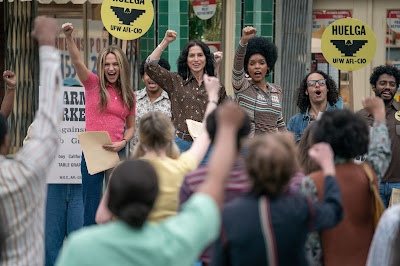 By the finale of The Glorias, you will be proud and thrilled by all that's been accomplished, even as you're chastened and saddened by what is needed still. Unless of course you're a white male (or female) supremacist. (Or one of those movie critics who dislikes the work of Ms Taymor.) 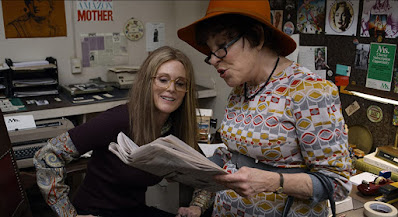 From Roadside Attractions and LD Entertainment and running 2 hours and 27 minutes, the movie opened via digital streaming exclusively on Amazon Prime Video (free to members) yesterday, September 30. Even if you think you already know all about Gloria, take a chance on this one. (That's Bette Midler, above, right, who makes a terrific Bella Abzug.)
TrustMovies at 12:56 PM
Share