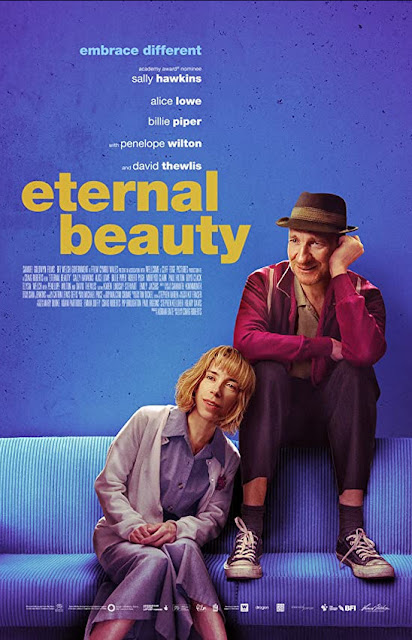 Yes, it's being billed as a comedy, but anyone who suffers from depression or is in close contact with one of those sufferers will probably see ETERNAL BEAUTY as real a movie about this subject as has yet come to pass. Oh, it has its very funny moments (any movie that stars the great Sally Hawkins would have to), but overall the film's exploration of this particular world of Jane, its depressive main character, is equal parts shockingly unsentimental and carefully, artfully conceived and executed. 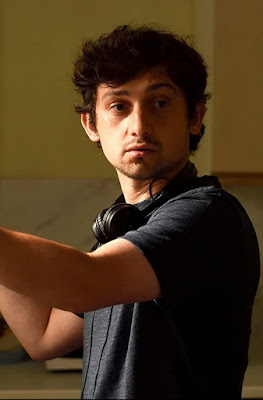 Writer/director Craig Roberts, shown at left and better known perhaps as an actor (Submarine, Becoming Human), has taken his tale at least in part from the life of a good friend of his (his dedication during the end credits is to "the real Calamity Jane"), and this real-life situation seems to have inspired Roberts to create something unlike anything TrustMovies can recall seeing on this subject, filmwise.
Mr. Roberts refuses to revel in the usual; instead he looks at the life of Jane (Ms Hawkins, below) from as many angles and in as many different situations as are manageable in a 95-minute running time. We begin with therapy and a flashback to her wedding then move on to dysfunctional family, fantasy, what socializing she can manage, a major love interest and more. 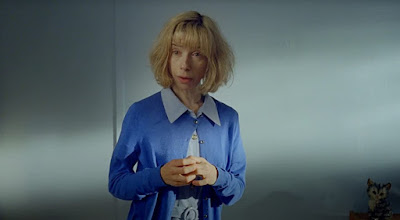 To my eye and mind, nothing here is played for comedy, though some of it is indeed darkly humorous. But it is unfailing real and all too believable. Roberts and Hawkins capture incredibly well the mindset of the depressive and the skewed perspective from which this person views so many events. 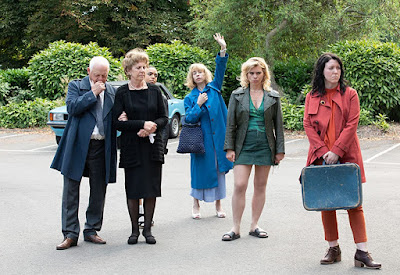 At the same time, the filmmaker explores what Jane's parents -- uber controlling and somewhat vicious mother (the fine Penelope Wilton, second from left, above) and weak father (a vulnerable, sad Robert Pugh, above, left) -- have taken and/or added to her life, how her conniving, narcissistic sister (Billie Piper, below and second from right, above) plays and betrays her; 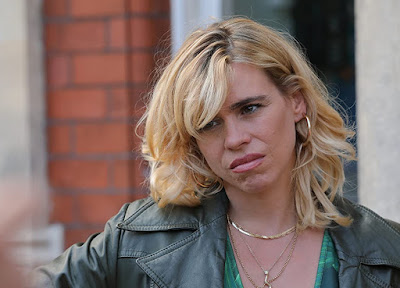 and even how her most "normal" relative (married sister Alice played by Alice Lowe, at right, two photos above, and below) does seem, as Jane describes her, a bit "boring." Yet next to Jane herself, Alice is someone you'd want to hang onto for dear life. 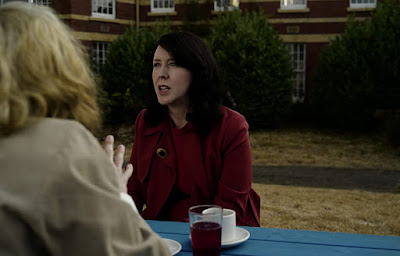 Eternal Beauty portions out blame (if you can call it that: more likely just reasons) for Jane's behavior in a manner that seems to me pretty fair and square. Therapy, too, takes its licks here. The point, in any case, is to somehow get through it all. For a time, it seems as if the man Jane meets (or re-meets) in the waiting room might just do the trick, as he seems equally disturbed and somehow a good match for our heroine. 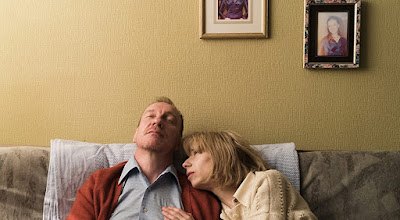 As brought to amazing/funny/scary life by the wonderful David Thewlis (above, left, and on poster, top), one of the few actors who can actually steal a sene from Ms Hawkins (or anybody else), this oddball character actually fits into and helps expand Jane's own delusional world. 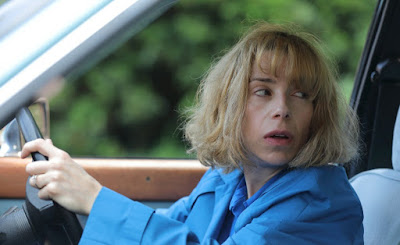 So thoroughly does Roberts and his cast engulf us in Jane's strange mindset that the experience quickly becomes sui generis, one-of-a-kind. How different (and so much less mainstream/feel-good) is this depiction of schizophrenia from that which we viewed just last month in Words on Bathroom Walls. Eternal Beauty won't be for every taste, but once it grabs you, you're hooked. 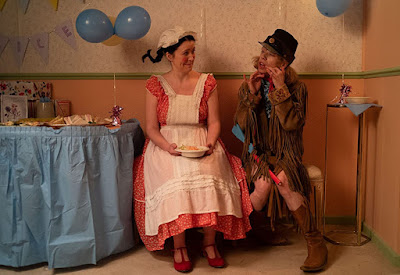 From Samuel Goldwyn Films and running just 95 minutes, the movie makes its VOD and digital debut this Friday, October 2 -- for purchase and/or rental.
TrustMovies at 12:12 PM
Share