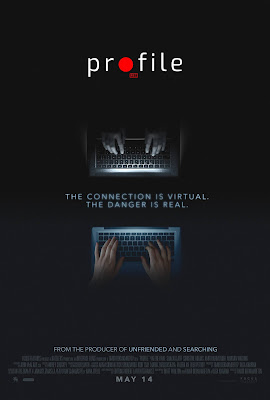 Rather reminiiscent of another entirely-online movie, Searching, which was first seen in 2018 -- the same year as PROFILE, the film under consideration here, made its festival debut -- this reviewer's first question is: Why has the latter taken three years to find U.S. distribution?

Even if the style is not spanking new (a number of previous movies have taken place mostly or entirely online), the content -- online recruitment by ISIS of young women to "serve" in its ranks -- is certainly still timely.

Further, its director Timur Bekmambetov (shown below) has had his share of success (Night Watch, Day Watch and Wanted), so a three-year wait, even including the current Covid pandemic, seems a bit much. 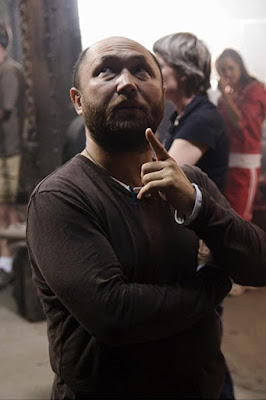 The film itself, despite its total reliance on what's in front of us on that computer screen, holds up pretty well. Once you buy into its scenario -- a pretty British journalist, to get a good story about how ISIS recruits young European women, goes online and, under an alias, pretends to have converted to Islam and may now be interested in joining up -- the movie will engross you and unsettle you.

Buying into that scenario, however, will mean glossing over moments early on in which our heroine, Amy (played by Valene Kane, below), worries more about looking young enough than whether or not she's wearing too much make-up on the face that her hijab so beautifully exposes. 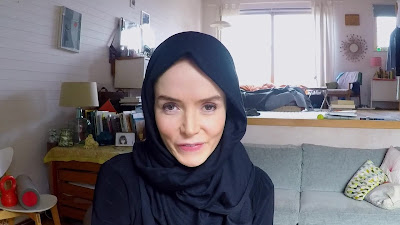 As co-written by Bekmambetov, Brittany Poulton and Olga Kharina, the screenplay seems computer proficient enough to engage technophiles, while pulling the rest of us along without too much kicking and screaming. TrustMovies found much of the written online correspondence too small to easily read, but he was still able to follow the plot in manageable fashion, as most of the movie is concerned with spoken dialog via video chats between Amy and her "recruiter" (played by Shazad Latif, below) 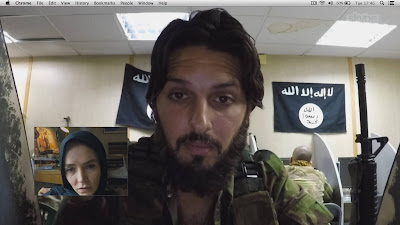 and, to a lesser extent, between Amy and her boy friend, Matt, and her boss at the journal (Christine Adams, at right, below). As expected, it takes awhile for the relationship between Amy and her recruiter to bud and blossom, and perhaps the film's greatest strength is that this happens in surprisingly believable fashion, keeping us viewers on edge and uncertain about just how involved -- personally, emotionally -- these two people actually are. 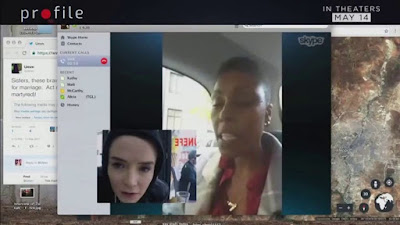 I can understand some viewers feeling that using a still-current and ugly subject like this for entertainment value renders the whole thing specious. (I don't think I've encountered much depth in anything I've seen of Bekmambetov's work.)  Yet the movie holds you fast and, in its fashion, delivers the goods.
I hope any women flirting with the idea of joining the Islamic State will see Profile before they do. Lest anyone imagine I am only anti-Islam, I would equally try to dissuade any young woman from joining Orthodox Judaiism or any Fundamentlaist Christian sect. They're all anti-woman, but I must admit that, regarding ISIS, the stakes are a good deal higher. 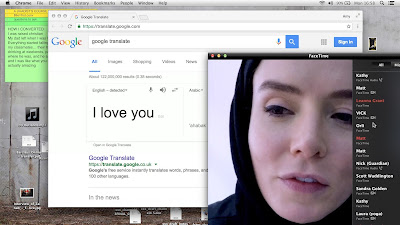