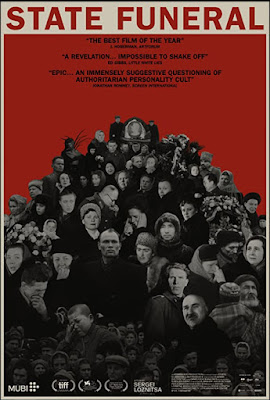 Of most interest, TrustMovies suspects, to big-time history buffs and Russophiles, STATE FUNERAL -- the 2019 documentary directed by Sergei Loznitsa (shown below, of My Joy) -- is two-and-one-quarter hours of black-and-white and color footage originally shot by the Soviets of the several-days-long funeral of USSR dictator Joseph Stalin.

There he is, "Uncle Joe," laid out in state complete with signature mustache. What a record-breaking, mass-murderer kind of guy!

I always forget which of these -- Hitler, Mao or Stalin, with Pol Pot closing in the outside -- holds the absolute record of most-innocent-citizens-killed. 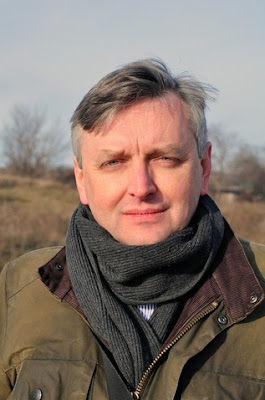 So here we are, watching as the hordes of "workers" (as well as the occasional head of state) from so many of those republics across the USSR (and next-door-neighbor Finland, too), pay their respects, seemingly utterly saddened by the news of their hero's death.

As we hear on the soundtrack the official version of how and why Stalin died, my mind wandered back to the wonderful Armando Iannucci comedy The Death of Stalin, and then to imagining how the many fans of our own would-be dictator Donald Trump will react (someday soon, I hope) to the news of that guy's death. How much has changed during the succeeding nearly 70 years, and yet how little -- particularly in terms of official "news" in Russia or elsewhere -- actually has. The only difference comes via the transmission of news. Hello, internet! 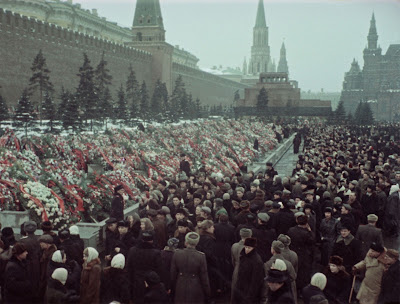 But back to the "spectacle," if you can even quite call it that. The publicity release refers to the film as "hypnotic," but I would only agree because the incredible repetition in the film is likely to put you to sleep. While there is identification of place, there is none of person (I thought I caught of a glimpse of Mao for a couple of seconds, and I know I saw Khrushchev early on) until toward the end we are told we're about to hear a speech by first Malenkov, then Beria, then Molotov. 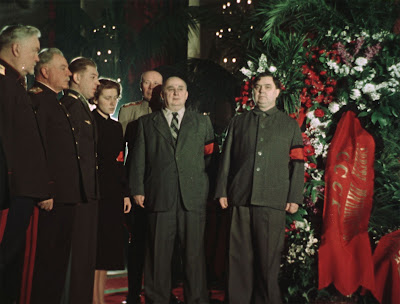 Yet any spoken words are, of course, utter nonsense. If you replaced all the references to the triumph of Communism here with that of Capitalism (or merely the word "business") you might be listening to any western politician anywhere else. 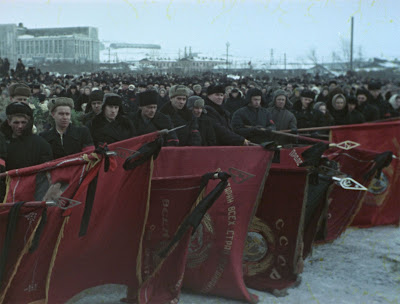 Much has been made of how this documentary shows us "authoritarianism" and "the cult of personality" at work via the brainwashed masses turning out to mourn. Come on. This happens because the documentary bangs us atop the head for over two hours to make the same point, and this happens in all countries under dictatorship (and not a few supposedly "democratic" ones, too). Russia was simply the best at this. Still is, I'd wager -- though China's a close second (and it has done a lot better at goosing its populace into a healthier condition). 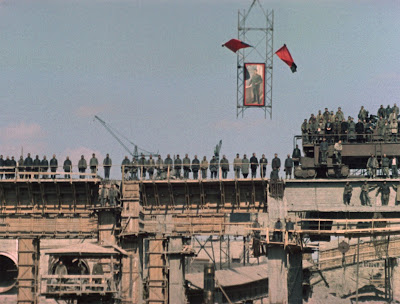 You may smile at some of the schlock poetry recited here, as you note the many artists at work trying to capture Uncle Joe at rest. And you may begin to notice that, while a lot of the women are indeed crying, the men -- a much sterner gender -- often seem annoyed or maybe a little befuddled. 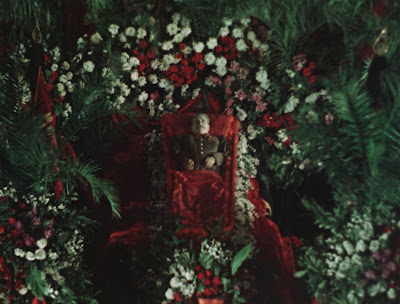 And the music! Of course it's funereal. But then, that was our Joe: Always ready with a purge, until it was time for a dirge. From MUBI, running 135 minutes and in Russian with English subtitles, State Funeral opens tomorrow, Friday, May 7, in New York City at Film Forum  (Click the preceding link for more information.)
TrustMovies at 4:44 PM
Share